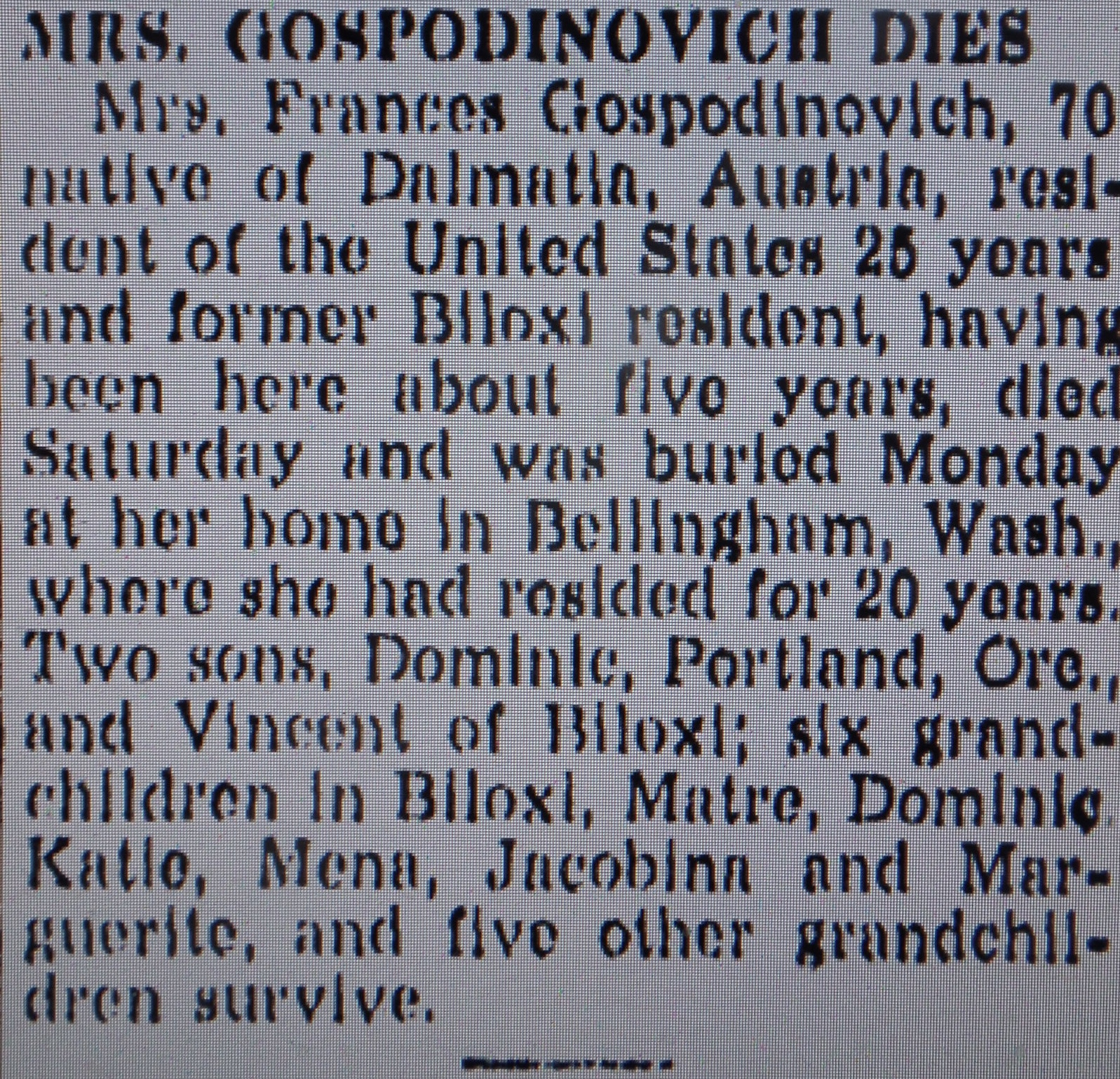 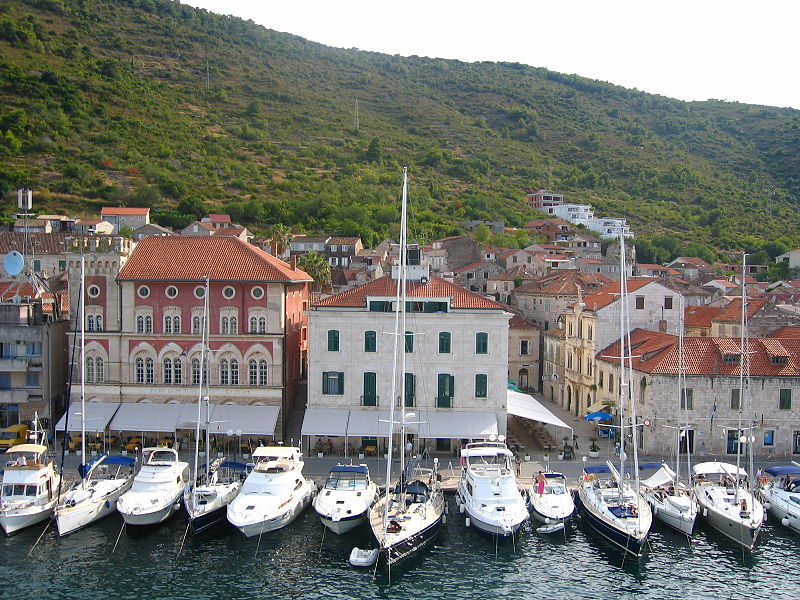 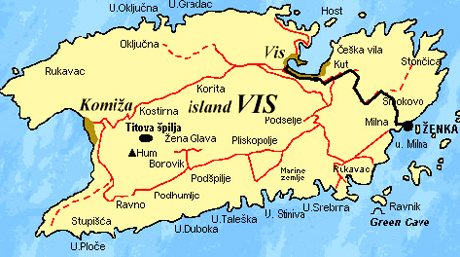 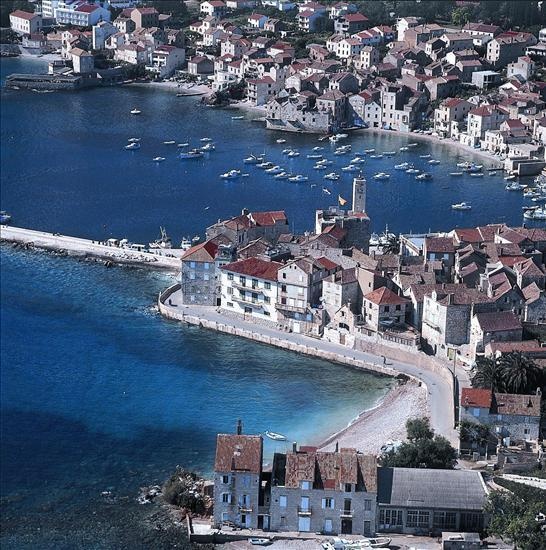 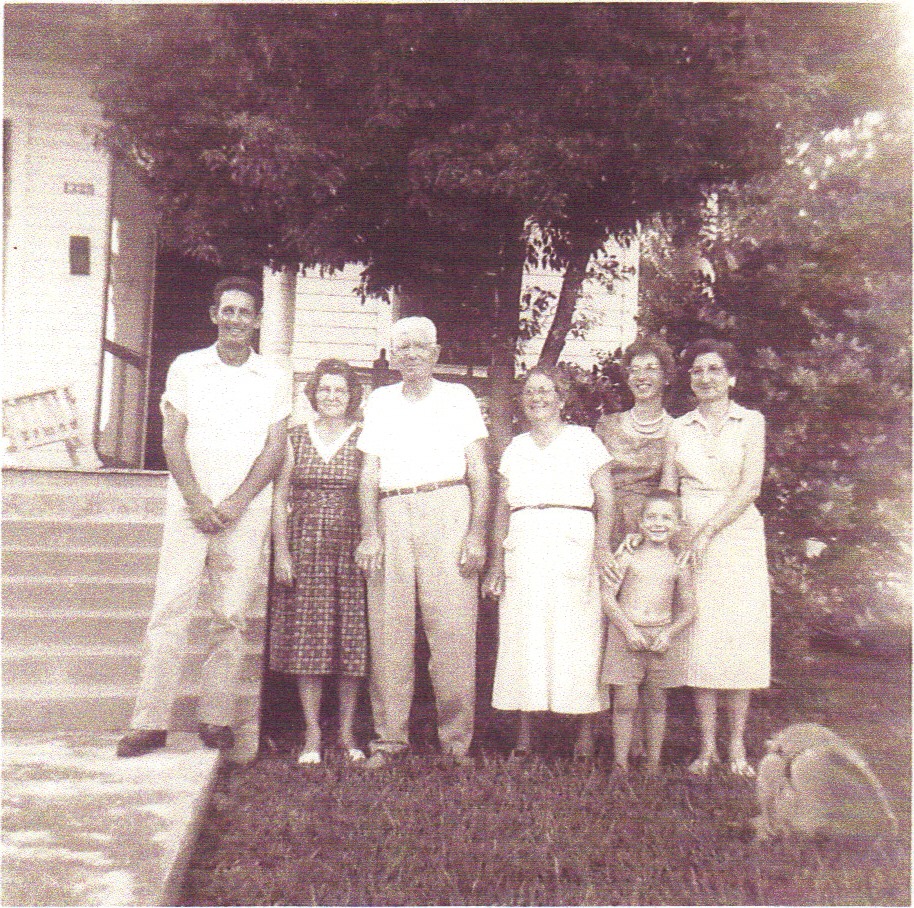 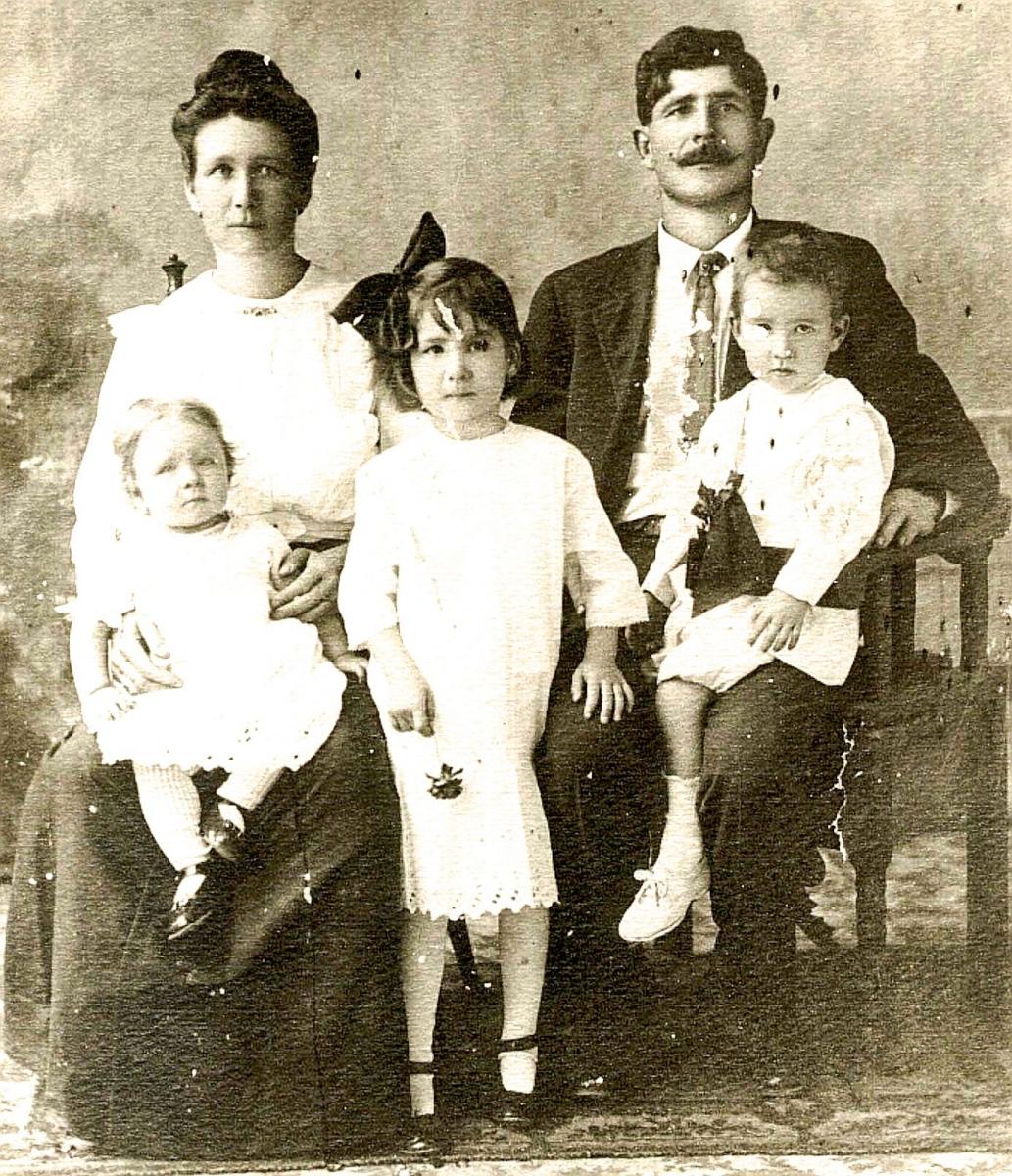 Vincent Gospodinovich (1882-1964) was born December 14, 1882 at Vis, County Split-Dalmatia, Croatia.  He made his livelihood at Biloxi as a fisherman.  His wife, Jacobina Trebotich, was the daughter of Mateo Trebotich (1853-1935) and Kate Sekul (1859-1948).  Mateo was born September 30, 1853 at Bobovisce, Brac, Dalmatia.  Mateo expired on September 6, 1935.  Their corporal remains were interred in the Biloxi City Cemetery.  Jackie Tabb, the granddaughter of Vincent Gospodinivich and Jacobina Trebotich, went to Croatia in 1985 and visited the Trebotich family home on the island of Brac.(Jackie Tabb, January 18, 2007)

Charles M. Davis, age 86 years, died Sunday, Oct. 1, 2000, in Biloxi. Mr. Davis was a lifelong resident of Biloxi and was a member of St. Michael's Catholic Church. He was a member of the Elks Lodge No. 606 where he served as house committee chairman for many years. He was preceded in death by his wife, Katie Davis. Survivors include a daughter, Mary Kay Hinton of Marietta, Georgia; a son, Charles Davis of the Latimer community, four grandchildren and two great-grandchildren. A service will be at 10 a.m. today at St. Michael's Catholic Church where friends may call one hour before service time. Burial will be in Southern Memorial Park Cemetery. The Howard Avenue Chapel of Bradford-O'Keefe Funeral Homes in Biloxi is in charge of arrangements. (The Sun Herald, October 3, 2000, p. A-5)

Jacobina Gospodinovich Tabb (1914-2006), age 91 years, of Biloxi, Mississippi died in Ocean Springs on January 3, 2006. Mrs. Tabb was born in Biloxi, Mississippi on March 21, 1914 to Vincent Gospodinovich and Jacobina Trebotich Gospodinovich. She was a lifelong resident of Biloxi having lived in the home she was born in on the Point until Katrina swept it away. She worked in the seafood industry until she was 80 years old. Mrs. Tabb was known as Aunt Jack to her many nieces and nephews and Granny to the vendors at the farmers market. She loved gardening and was a member of St. Michael's Catholic Church.  Mrs. Tabb was preceded in death by her husband of 33 years, John Henry Tabb; her brothers, Anthony, Matre, and Dominic; her sisters, Frances Gospodinovich, Katie Davis, Hendrieta Gospodinovich and Domena DeSilvey.

Mrs. Tabb is survived by her daughter, Jacqueline Tabb; son-in-law, Steve Williams; grandchildren, Shawn, Steve Jr. and Sherie Williams; one great-granddaughter; her sister, Margaret Leperi; and many nieces and nephews.  Services will be held at The Pass Road Chapel of Bradford-O'Keefe Funeral Home.   Burial to follow in Southern Memorial Park.(The Sun Herald, January 6, 2006)

Dumena "Mena" Gospodinovich DeSilvey (1919-2001), age 82 years, died Tuesday, June 19, 2001, in Biloxi.  Mrs. DeSilvey was a native and lifelong resident of Biloxi and was a homemaker.  She was preceded in death by a daughter, Arnell Knowles; and her parents, Vincent Gospodinovich and Jacobina Trebotich Gospodinovich.  Survivors include a daughter, Gayle Allen of Ouieda, Florida.; two sons, John DeSilvey of Eastabutchie and Jim DeSilvey of Biloxi; two sisters, Jacobina Tabb and Margaret LePeri; a brother, Matre Gospodinovich, all of Biloxi; three grandchildren; and five great-grandchildren.  Burial at the Biloxi City Cemetery directed by the Howard Avenue Chapel of Bradford-O'Keefe Funeral Homes in Biloxi.(The Sun Herald, June 21, 2001, p. A7) 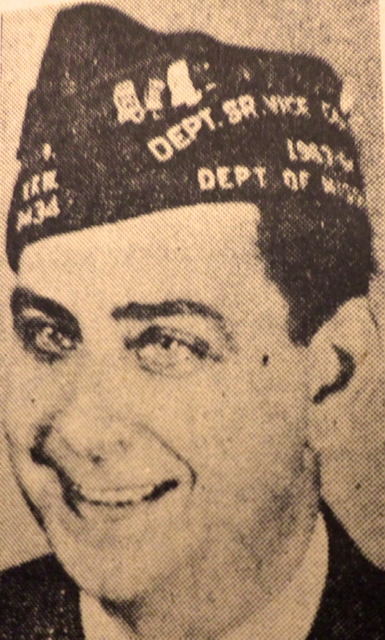 Mr. Leperi retired from Keesler Field Finance Office. He was in the Army in WW II where he received a Bronze Star among other awards. He received numerous awards as a member of NARFE, the MS State Bowling League, the Military Order of the Cootie, National Community Development Association and the Biloxi VFW. Mr. Leperi was very active in planning the Blessing of the Fleet in Biloxi and attended St. Michaels Catholic Church in Biloxi.  Mr. Leperi is survived by his wife, Margaret Gospodinovich Leperi, of Biloxi; son, Dominic T. Leperi, Jr. and his wife, Karin, of Greenbelt, Maryland; grandchildren, Kim Vincent and husband, Brian, of Lafayette, Louisian, Christie Smith and husband, Bobby, of Gulfport, Amy Este and husband, Steve, and Carrie Russell and husband, Lenny, of Metairie, Louisiana and Karson and Kosette Leperi of Greenbelt, Maryland: three brothers, Joe Leperi of Pennsylvania, Steve Leperi of Ocean Springs and Nick Leperi of New Jersey; and two great grandchildren.  Mr. Dominic T. Leperi, Sr, 84, of Biloxi, MS died Saturday, August 21, 2004 at home. The Mass of Christian Burial will be at St. Michaels Catholic Church Wednesday at 10 a.m. where friends may visit one hour before service time. Burial will follow in Biloxi National Cemetery under the direction of Bradford-O'Keefe Funeral Home of Biloxi.(the Sun Herald, August 25, 2004, p. A-10)

[Ray] It looks like the "h" was added to the Yugoslavian names when they got here.   I took pictures of the cemetery in Brac when I was there in 1985 and the "vic" was without an "h".  Also, if you look in the cemetery in Biloxi some graves say "Austro Hungary", some "Dalmatia", some "Yugoslavia", but they were all born in the same town.  It's just whoever ruled the country at a particular time.  Grandpa was from the island of Vis.  Grandma was from Bobovise, Island of Brac.  I went to Bobovise in 1985 but could not visit Vis as it was a military installation.  Grandpa worked on the boats with my great grandpa Trebotich (great grandma Sekul) and rented a room from them on Cedar St.  He sent for his brothers and mama.  She didn't like Biloxi so they went to Washington State.  I have a picture of grandpa's daddy in the Austrian? Navy taken in the 1890s?, but I think he died before grandpa came here.  This is about my grandpa's sister.  The text is from The Daily Herald of April 29, 1921.  I left the spellings as they were.  The spelling on the tombstone is Andrijila Gospodinovich born May 24, 1897 and died April 25, 1921.  Mama said she died of a broken heart because her brother in Washington caught pneumonia and died.  She was in New Orleans to see Brother Isaih [sic] who was supposed to be a healer.  Mama said the casket was on a horse drawn carriage.

“The funeral of Miss Audrejea Guspodinovich, who died in New Orleans and was buried yesterday afternoon, was one of the most unusual held in Biloxi in some years.  The body of the deceased woman was brought to Biloxi where it lay in state for the usual time.  The funeral services began yesterday afternoon at 4 o'clock when the body was taken to the St. Michael church where special services were conducted with Rev. Father Nelius Downing officiating.  Following the impressive services, the funeral cortege proceeded to the cemetery headed by a brass band which played a number of funeral marches.  There were in attendance at the funeral a large number of people, mostly residents of the eastern section of the city.  A number of young women also acted as honorary pallbearers, carrying large wreaths and beautiful flowers which were placed upon the grave.  Other services were held at the cemetery, the funeral consuming several hours to carry out."

The Daily Herald,“Change of masters at Customs House”, September 20, 1919.

The Daily Herald,“Two injured as speeding auto hits another”, December 18, 1950.