Several years before he retired to Biloxi, Dr. Absalom Jackson and his small family resided at Ocean Springs, Mississippi, a small resort community, on the east side of the Bay of Biloxi.  Here in June 1894, Dr. Jackson leased and managed the Ocean Springs Hotel.  Charles L. Dyer in Along The Gulf (1895), lauded The Jacksons’ management of this resort as follows:

They have the best accommodations for excursionists, commercial travelers and families, and, as Ocean Springs is unsurpassed for healthfulness, being free from epidemics, etc. it makes one of the prettiest spots on the coast at which to pass a vacation.  Guests of the hotel can be served with mineral water from the famous marble springs controlled by them...

Dr. Ab Jackson renewed his lease for another year as indicated by this line in The Pascagoula Democrat-Star of October 11, 1895:  Dr. A. Jackson has leased that popular hostelry, the Ocean Springs Hotel, which will continue under his excellent management for another year.

In late February 1898, Dr. W.C. Jackson, a prominent medical practitioner at Montgomery, and a brother of Dr. Ab Jackson, visited him at the Ocean Springs Hotel.  (The Pascagoula Democrat-Star, February 25, 1898, p. 3)

After leaving the Ocean Springs Hotel, probably after the fall season of 1898, Dr. and Mrs. Jackson relocated to the Mobile area operating the Spring Hotel in 1900.(The Pascagoula Democrat-Star, February 2, 1900, p. 3)  This is corroborated somewhat by the fact that in November 1898, Dr. Jackson’s son, Ab Jackson III, went to Mobile employed with the YMCA as a stenographer.(The Pascagoula Democrat-Star, February 25, 1898, p. 3)

New management arrived at the old hostelry on Biloxi Bay, in May 1899, when F.M. Allen of Chicago took control of the Ocean Springs Hotel.(The Pascagoula Democrat-Star, May 26, 1899, p. 3)

In July 1910, Dr. Ab Jackson entered the political arena at Biloxi.  He ran to represent the people of the 2nd Ward, as their city alderman.  A local journal related the following about Ab Jackson’s political advent:

Dr. A. Jackson is well known to the voters of Biloxi.  For the past nine years he has been a resident of the city, engaged in the practice of his profession-dentistry.  Prior to coming to Biloxi he successfully conducted for eight years the Ocean Springs Hotel, since destroyed by fire, and during its existence one of the largest institutions of its kind on the Coast.  Should Dr. Jackson be elected he will no doubt prove a valuable member of that body.(The Ocean Springs News, July 23, 1910, p. 1)

Dr. Jackson withdrew from the race, only days before the second Democratic primary was held on August 29, 1910.  He gave no explanation for his quitting the contest against Mr. Castanera who was declared the winner.  Age could have been a factor, as Dr. Jackson was approaching seventy years.(The Daily Herald, August 30, 1910, p. 1)

Dr. Jackson and his wife both died at Biloxi in the care of their son, Ab Jackson III, who resided at 124 West Beach.  Laura Scott Jackson expired on January 5, 1922.  After funeral services at her son’s residence, her corporal remains were sent via the L&N Railroad to Auburn, Alabama for perpetual internment.  At Biloxi, Mrs. Jackson was a dedicated Methodist and attended services and worked diligently at the Main Street Methodist Church.  In addition, she commenced the first chapter of the United Daughters of the Confederacy at Biloxi.  At the time of her demise, Dr. Jackson was residing at Bayou La Batre, Alabama.(The Daily Herald, January 5, 1922, p. 4)

His great grandson, Glenn Andrews II of Anniston, Alabama, relates that Ab Jackson II was buried in his Confederate States of America military uniform.  Dr. Jackson vowed that if the South lost the Civil War that he would never shave his face.  Needless to say, he died with a very long beard!(Glenn Andrews II, August 3, 2001)

Ab Jackson Sr. made his livelihood as a hotelier and entrepreneur.  At various stages in his career, he had managed the Union Hotel at Meridian, Mississippi, the Cawthorn Hotel in Mobile, and the Bienville Hotel of New Orleans.  He had other affiliations with the Lessee Scoville Hotel in Atlanta and Chattanooga’s Ester Hotel.  Mr. Jackson had also been the auditor for The Battle House at Mobile.  At Mobile, he also commenced the Marine Supply Company.  In addition, Ab Jackson III had been employed by the Federal government’s income tax division in Washington D.C.(The Daily Herald August 22, 1959, p. 2)

Prior to his hotel career, Ab Jackson III had matriculated to the Alabama Polytechnical Institute, now called Auburn University, for his education.  Jackson’s military service was highlighted by his participation in the Spanish American War of 1898.  At Auburn, he had been an Alpha Tau Omega.  Mr. Jackson was an honorary member of the SCS Society in Mobile, Sons of Confederate veterans, and worshipped with the Methodist Episcopal Church, South.(Ibid., p. 2)

Ab Jackson III expired at the Wayside Rest Home at 113 Davis Avenue in Long Beach, Mississippi on August 22, 1959.  His corporal remains were sent to the Oakwood Cemetery at Montgomery, Alabama for eternal rest.(Bradford-O’Keefe Burial Book 42, p. 138)

Ab Jackson IV attended Biloxi public schools.  He graduated with the Biloxi High Class of 1927 on June 3, 1927, as valedictorian.  Ab compiled a 92 average in his scholastic work, which was three points higher than the salutatorian, Grace Watson.  For his efforts, he was awarded an academic scholarship to Tulane University at New Orleans.  Mr. Jackson declined the honor, as his desire was to attend Princeton University of the Ivy League.(The Daily Herald, June 3, 1927)

During the commencement exercises of June 3, 1927, Ab Jackson delivered the valedictory address.  His speech related that the seniors had certain regrets about leaving school and that companions of twelve years were about to drift away on the winds of fate.   In addition, he emphasized that they would be alone now as their comradeship was ending.  The class was at a crossroads in their life, soon to part for a new life.  At the ceremony, Professor Ditto presented Ab Jackson the second place chemistry medal for his essay in the State contest.(The Daily Herald, June 4, 1927)

Ab Jackson matriculated to Princeton University in New Jersey, and graduated with high honors.  While at Princeton, he was a member of the Cloister Inn Club.  After college, Mr. Jackson relocated to the Crescent City where he found employment with the public relations department of the City of New Orleans.  Ab Jackson also worked for the International House, the National Bank of New Orleans, and served as secretary of the Louisiana Restaurant Association.(The Sun Herald, July 18, 1976, p. A-2)

In his holography written in 1975, Mr. Jackson appointed his daughter, Tyler Dotterer of Yorba Linda, California, as the executrix of his estate.  His real property was divided amongst his spouse and children.  Ab Jackson IV also requested that his corporal remains be sent to the Oakwood Cemetery at Montgomery, Alabama for internment. (HARCO, Ms. 2nd JD Chancery Court Cause No. 6041-1976) 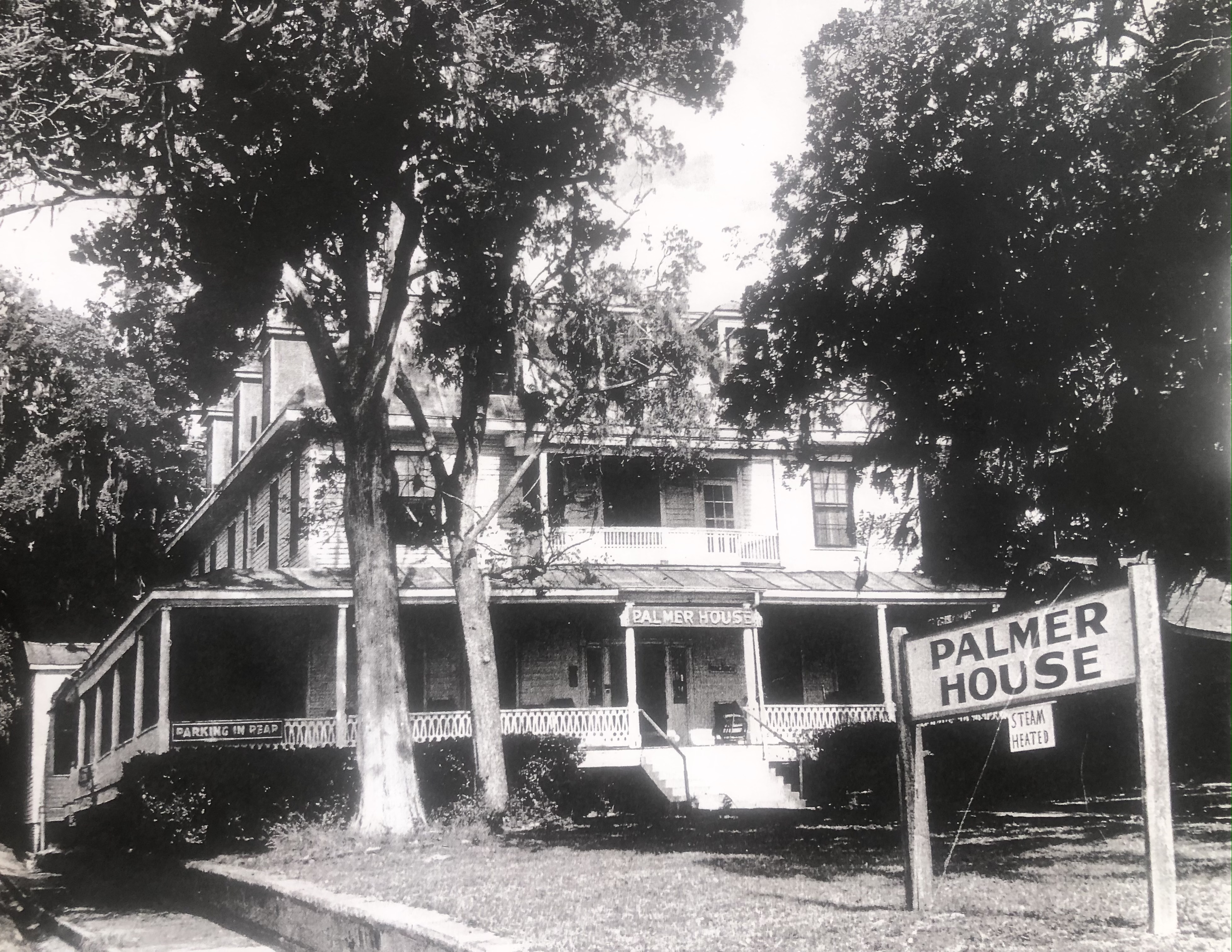 In 2001, Ab Jackson V resides at 3517 Chartres Street in New Orleans.  He is a sculptor and potter.  Ab is also a musician and writer.  His nom de plume is David Nash and in recent years has preferred to be known as such.  Tyler J. Dotterer is a Duke University Mathematics graduate.  She and her husband worked in the aerospace industry in California, prior to their recent retirement.  They are now traveling the continental United States via motorhome.(Glenn Andrews II, August 2, 2001)