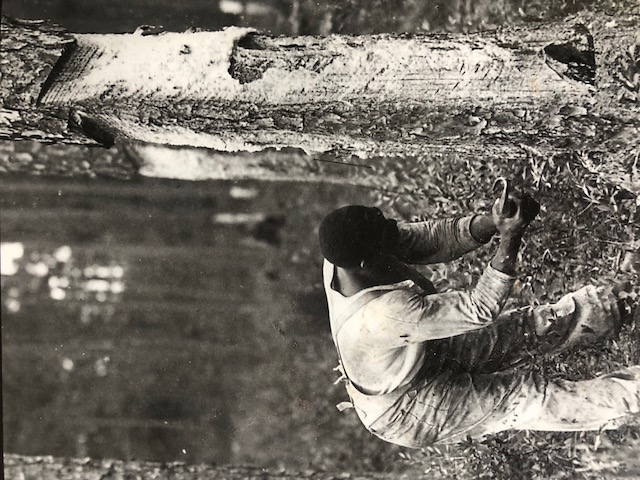 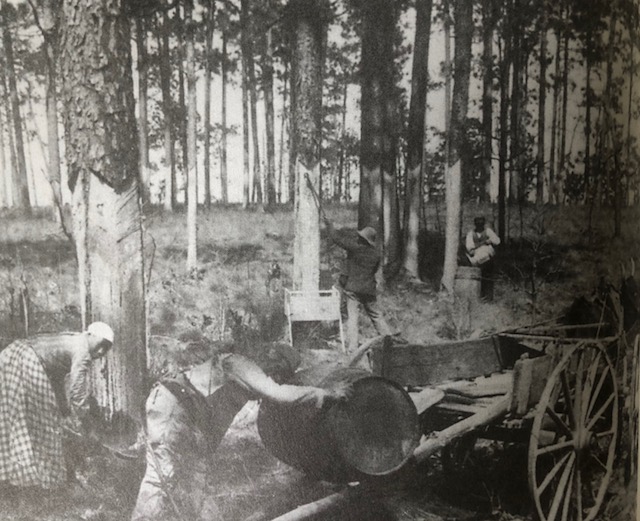 Charles Brooks Elarbee (1861-1917) was born February 26, 1861 at Waycross, Georgia.  He came to Biloxi in 1903.  Elarbee was engaged in the turpentine business in Harrison and Jackson Counties primarily with D.J. Gay.  They operated as Gay & Elarbee. In 1906, his Ocean Springs Naval Stores Company consisted of D.J. Gay, C.B. Elarbee, and George Robinson.

After leaving the turpentine business circa 1912, Mr. Elarbee relocated to New Mexico where he bought a ranch.  After 1914, he divided his time between the Far West and Biloxi.  Circa 1915, C.B. Elarbee suffered a debilitating stroke at Biloxi.  He expired on February 6, 1917, in the home of Daniel J. Gay at 1018 West Beach where his corporal needs were attended.  C.B. Elarbee was a member of the Biloxi Elks Lodge No. 606.  He was a Methodist and Mason.  Mr. Elarbee’s corporal remains were interred at Ellabelle, Bryan County, Georgia.  He was survived by, Zera Leon Cox, a sister, of Ellabelle, Georgia.(The Daily Herald, February 6, 1917, p. 3)

Daniel Judson Gay (1870-1949), the son of John W. Gay and Salida Lanier, was born in Emanuel County, Georgia, which is governed from Swainsboro.  He came to Biloxi in 1902, from turpentine operations in Florida.  Gay married Lee B. Champlin (1884-1964) on December 8, 1903.  She was the daughter of Judge Zachary Taylor Champlin (1847-1924) and Virginia White Champlin of Handsboro.  Their other children were: William Henry Champlin (1870-1931), Maggie Champlin, Nellie Champlin, and Walter Champlin.

The Gay family resided at Biloxi on the Beach east of the Dantzler House.  They later lived on the Tchoutacabouffa River and at Ocean Springs, Mississippi.

D.J. Gay was locally involved in the naval stores business operating turpentine operations in Harrison and Jackson Counties.  His first partner was fellow Georgian, Charles B. Elarbee (1861-1917).  Gay later worked with George L. Robinson (1848-1919+) and Robert W. Hamill (1863-1943) of Chicago.  His son, J. Champlin Gay, and brother, Edward C. Gay, also were associated with Gay in the turpentine business.  It is believed that E.C. Gay residing at San Antonio, Texas ran the family turpentine operation near Durango, Mexico between 1927 and 1932.     D.J. Gay was a philanthropist.  In December 1926, he donated land for the erection of the public high school on Government Street at Ocean Springs.

The Gay Turpentine Company was incorporated in 1911, and domiciled at Larue, Mississippi.  Robert W. Hamill was the president and Daniel J. Gay, the secretary-treasurer.  Stockholders were:  Lyon Company-60 shares; D.J. Gay-20 shares; R.W. Hamill-15 shares; Frank Matlock-3 shares; and W.G. Beasley of Leesville, Louisiana-2 shares.  The Daily Herald of August 21, 1920, related in an article, "Daisy and Vestry Thriving", that "the Gay Turpentine is doing a fine business with O.J. Cuevas as manager.  The company was dissolved in May 1921.(Ex parte-Gay Turpentine Company, JXCO Chancery Court-Cause No. 4187)

Daniel J. Gay like most Americans lost his fortune during the Depression.  He never declared bankruptcy and paid his creditors.  In 1945, Mr. Gay moved to Tampa, Florida where his daughter, Louise Dantzler, resided.  He passed on here in early December 1949.  Mrs. Gay expired at Inverness, Mississippi in February 1964.  They are both interred in the Southern Memorial Park Cemetery at Biloxi.(The Daily Herald, December 5, 1949 and The Daily Herald, February 11, 1964, p. 2)

Lee Vernon Pringle (1866-1938) was a native of Semmes Chapel, Mobile County, Alabama.  He was born February 28, 1866, the son of Frank M. Pringle and Corinia Yonge (1845-1920).  L.V. Pringle came to Biloxi in 1908, probably from Latonia, Jackson County, Mississippi where he was associated with the Latonia Turpentine Company and Union Naval Stores of Mobile.  These organizations were naval stores manufacturers and dealers in general merchandise.  In 1901, Pringle served as postmaster at Latonia, which is about 12 miles northwest of Semmes Chapel, Alabama.

Mr. Pringle invented a turpentine cup, which was manufactured by the Pringle Cup Company in Daisy, Tennessee.  In 1902, the Chattanooga Pottery Company of Daisy, Tennessee was formed by the Consolidated Naval Stores Company, to manufacture clay cups.  Consolidated Naval Stores was formed by the merger of seven Florida and Georgia factorage houses also in 1902.  They had offices in Savannah, Jacksonville, and Pensacola.  It is very probable that the Pringle Cup Company was a name only and that the clay cups were manufactured by the Chattanooga Pottery Company.

It is interesting to note that in October 1912, The Daily Herald, reported that D.G. Zeigler, proprietor of the Petrous Manufacturing Company, was erecting factory on Lee Street in Biloxi near the L&N Railroad tracks.  Zeigler planned to make turpentine cups at his plant.(The Daily Herald, October 16, 1912, p. 8)

L.V. Pringle was elected president of the Turpentine and Resin Association of New Orleans in January 1918.(The Daily Herald, January 26, 1918, p. 3)

In addition to his naval stores operations in Mississippi, Mr. Pringle had turpentine and rosin at Florida, Alabama, and Louisiana.  He was vice-president of the Gillican-Chipley Company of New Orleans for fifteen years and held the same position with the Pringle-Gay Turpentine Company.  L.V. Pringle also had his own real estate company and held large personal land holdings.

Frank Ernest Pringle (1872-1925) was born at Semmes Chapel, Mobile County, Alabama on August 18, 1872.  His parents were Frank M. Pringle and Corinia Yonge.  He came to Biloxi in 1908.  F.E. Pringle was in the turpentine business in Harrison and Jackson Counties.  He was president of the Jackson Naval Stores Company.  In 1913, they were headquartered in the Bolton Building at Biloxi.  George F. Mason served the organization as vice-president while A. Hadley was secretary-treasurer.(Biloxi City Directory 1913-1914, p. 154)

F.E. Pringle was highly lauded in May 1916, for the celerity in which he rebuilt the Jackson Naval Stores still at Florala.  The fire still, located near the Florala Post Office, had been completely destroyed in a conflagration.  Pringle brought in equipment and supplies from other company operations as well as sending damaged machinery to Mobile for repair.  The Daily Herald of Biloxi said of Mr. Pringle's efforts, "this is the quickest work of its kind ever seen among turpentine producers in this section" (The Daily Herald, May 30, 1916, p. 8).