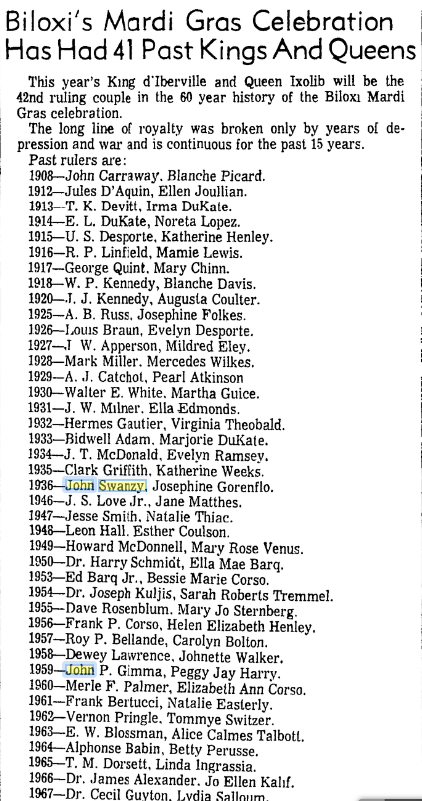 1883-According to Mayor Ed Glennan, a Mardi Gras celebration was held in Biloxi in 1883.

What is considered to be the first Mardi Gras celebration at Biloxi occurred on March 3, 1908. 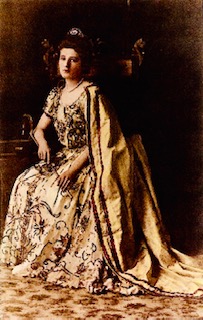 Blanche Picard (1887-1930+), a native of New Orleans, graduated from Biloxi High School in May 1904 and Elizabeth College, Charlotte, North Carolina before she married Solomon Edward ‘Sollie’ Levy (1882-pre-1930).  Sollie E. Levy was born at Newborn, Alabama.  At Biloxi on August 27, 1908 in the Presbyterian Church, Rabbi Mose Bergman of New Orleans performed their nuptials.  Phil Riser of Demopolis, Alabama and Florence Picard, sister of the bride, were Best Man and Maid of Honor respectively in their wedding.  Sollie E.  Levy was a successful traveling salesman.  The couples was home was in or near St. Louis, Missouri.(The Biloxi Herald, August 14, 1908, p. 1 and August 27, 1908, p. 1 and Harrison Co., Mississippi MRB 21, p. 38)

John Carroway was a candidate for Beat One Board of Supervisors of Harrison County in 1907.(The Biloxi Daily Herald, July 29, 1907, p. 2)

In late 1917, with World War I raging in Western Europe, the 1918 Mardi Gras was cancelled at New Orleans.  Mayor Glennan was enamored with celebrating Mardi Gras at Biloxi and called a meeting of the Biloxi Carnival Association in late December 1917 to ascertain if the business community desired to have a Mardi Gras day fete.(The Daily Herald, December 29, 1917)

On October 1, 1882, Tony Catchot joined the L&N  Railroad.  A.J. Catchot's engineering abilities were so impressive that in October 1894, he was sent to Pensacola, Florida to assist in building the Muscogee wharf, the docks at Commandancia and Tarrangona Street, and a coaling station for U.S. Steel.  In 1900, the L&N loaned him to the U.S. Navy to rebuild the docks at Warrington, Florida.  He then went to the Dry Tortugas to construct wharves and a condensing plant.  Catchot was also loaned to the Gulf & Ship Island Railroad to erect the piers at Gulfport in 1901.

Tony Catchot returned to the L&N Railroad in 1902, and was promoted to Superintendent of the Bridge and Building Department of the New Orleans-Mobile Division in 1907.  He remained as this prestigious post until 1943.  A.J. Catchot had bought the old Louis Darring property on the southeast corner of Washington and Desoto in 1897.  He built a new structure here commencing in February 1897.  It served as a saloon until it closed in April 1899, leaving George Arndt's Paragon Saloon the only one in town.  Catchot later rented the structure to various merchants.

Through the years many honors and awards were bestowed upon Captain Catchot.  He was a board member of the Farmers and Merchants State Bank in 1915, and elected president of the bank in September 1925.  In May 1925, Catchot formed the Superior Oil Company of Ocean Springs with J.J. Kennedy and F.B. Royster.  The purpose of this $15,000 capitalized company was to market gasoline and oil in the area.

Tony Catchot was elected president of the L&N Veterans Club for the New Orleans- Mobile Division in the late 1920s.  In 1929, he reigned as King d'Iberville of the Coast Mardi Gras Association.  Catchot was a charter member of the Ocean Springs Fire Company No. 1 joining in 1880, and serving as its fire chief for nearly sixty years.

Antonio John Catchot retired from the L&N on January 1, 1947, after sixty-four years of loyal and meritorious service to that organization.  He died on August 11, 1954, at Handsboro, Mississippi.  Catchot's remains were interred at the Evergreen Cemetery on Fort Bayou.

Fifty children, residing in the 'Possum Neck' neighborhood [Claiborne Street, Dorries Street and Pearl Street] east Biloxi, and sponsored by H.R. Richmond, held a junior carnival parade in their neighborhood.  The four floats were designed by the children with Rene Alford and Kathryn Hecht as rulers of 'Possum Neck'.(The Daily Herald, February 15, 1934, p. 2) 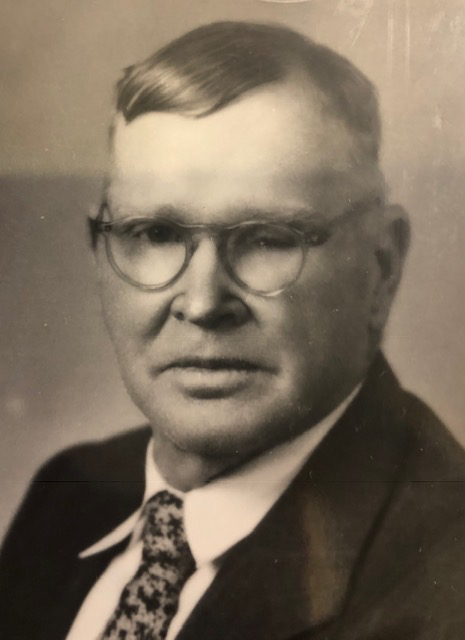 Our Mother of Sorrows Catholic colored school held a carnival parade on February 23rd.  Nine floats carried children dressed in appropriate costumes representing: Uncle Sam and Miss Columbia' Kights and Ladies; Indians; and Miss Our Mother of Sorrows of 1941.  The Sisters of the Blessed Sacrament who teach at the school planned and worked diligently to produce the parade.  An orchestra, riders on gayly colored bicycles led the celebrants.(The Daily Herald, February 24, 1941, p. 3) 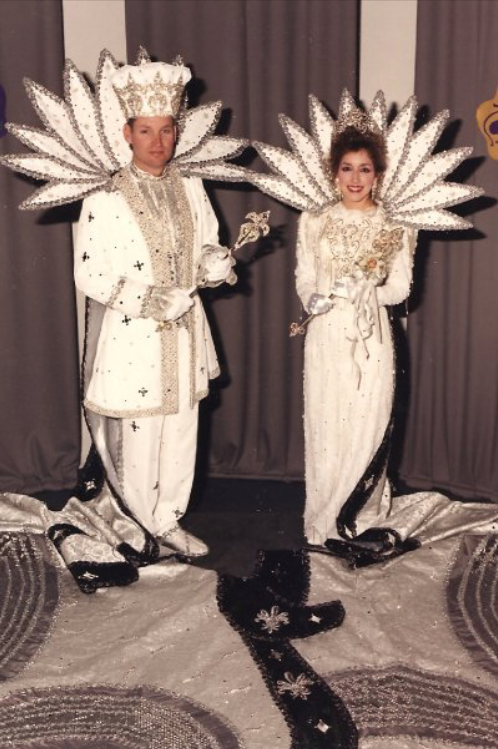 The Daily Herald, “Carnival is climaxed with Biloxi parade”, March 3, 1965.