Joseph Santini made his living at New Orleans as the proprietor of a coffee house.  At this time, a coffee house was a saloon or bar room.  The Joseph Santini coffee house was located on Gravier Street and called the Jewel of the South which he operated from 1833 until 1869.  He is mentioned in many publications concerning the origin of mixed drinks.  An example follows: Sometime around 1850, one Joseph Santini took over management of the bar and restaurant at New Orleans’ City Exchange, right in the heart of the French Quarter.  There he invented the Crusta, a fancy variation that introduced citrus juice into the list of things that could go into a drink. This stayed purely a local drink until Jerry Thomas—who must have met Santini and/or had his drinks when he was in the Crescent City in the 1850s—put the Crusta in his book. This isn’t to say the Crusta was a huge hit. It was always a cult drink—one with few but fanatic devotees.  But it planted a seed. That seed would remain dormant until the 1890s, when suddenly everyone started putting lemon juice, lime juice, even orange juice into their cocktails. From the Crusta, evolution brings us the Sidecar—and life without Sidecars would be very dreary indeed. If Santini hadn’t done it first, they still might have done it anyway, but at least they had someone in the dark backward of time shining a flashlight for them to show the way. Mr. Santini, we salute you. [The Times-Picayune, October 18, 1987, p. 101 and cocktailconfidential.latimesmagazine.com/]

Joseph Santini retired from the Jewel of the South in January 1869.  He conveyed his coffee house to George B. Ittman.  Mr. Santini related to his regular customers that: “He (Ittman) will keep he old saloon in splendid style, and with the best liquors andwines, so as to respond to the old reputation of this establishment.”(The Daily Picayune, January 24, 1869, p. 4)Joseph Santini provided excellent education opportunities for his children and offered incentives and awards for the scholars in the schools that his children attended.  Gabriel Santini was a law graduate of Washington & Lee University at Lexington, Virginia.  Marietta Santini attended the Locquet Institute, a private school for the privileged young ladies of the Crescent City, and located at 253 St. Charles Avenue.   Marietta and Josephine Santini matriculated to the Virginia Female Institute at Staunton, Virginia and graduated in July 1872.(The Daily Picayune, July 30, 1872, p. 2)

At the Locquet Institute, Joseph Santini provided the Santini medals to the students that excelled in French and elocution.  In May 1869, Miss Marietta Santini was awarded the palm of excellence in the preparatory department, but she declined to compete for her father’s medals.  Mr. Santini was sincerely appreciated by the young ladies of the Locquet Institute as they gave him a set of gold cuff links.  They were engraved with an open book on one side and the word ‘education’ on the other.  Joseph Santini was described by the Institute’s staff as ‘unweary in his efforts to promote zeal in scholastic pursuits.’(The Daily Picayune, May 1, 1869, p. 1 and May 29, 1869, p. 1)

The Joseph Santini was situated at 860 West Beach in Biloxi.  It has been described as an American Cottage.  It is believed that the Santini House was erected circa 1837 by John Bligh Byrne of New Orleans.  When it was conveyed to Henry

In June 1897, the Heirs of Joseph Santini platted the Santini Addition subdivision in Biloxi, Mississippi.  It was situated on the north side of the tracks of the L&N Railroad and ran north for about .  Present day Santini Street formed the eastern perimeter of the land subdivision.(Harrison Co., Mississippi 2nd JD Plat Bk. 2, p. 4)

On the south side of the L&N Railroad tracks opposite the Santini Addition subdivision, the Heirs of Joseph Santini owned three small lots that ran about 333 feet south to Pass Christian Street [West Howard Avenue] and had a 179-foot front on Biloxi’s salient east-west artery.  E.W. Morrill surveyed these lots and Lot 1 was sold to Peter M. Gillen in October 1891 for $250.(Harrison Co., Mississippi Land Deed Bk. 27, p. 184) 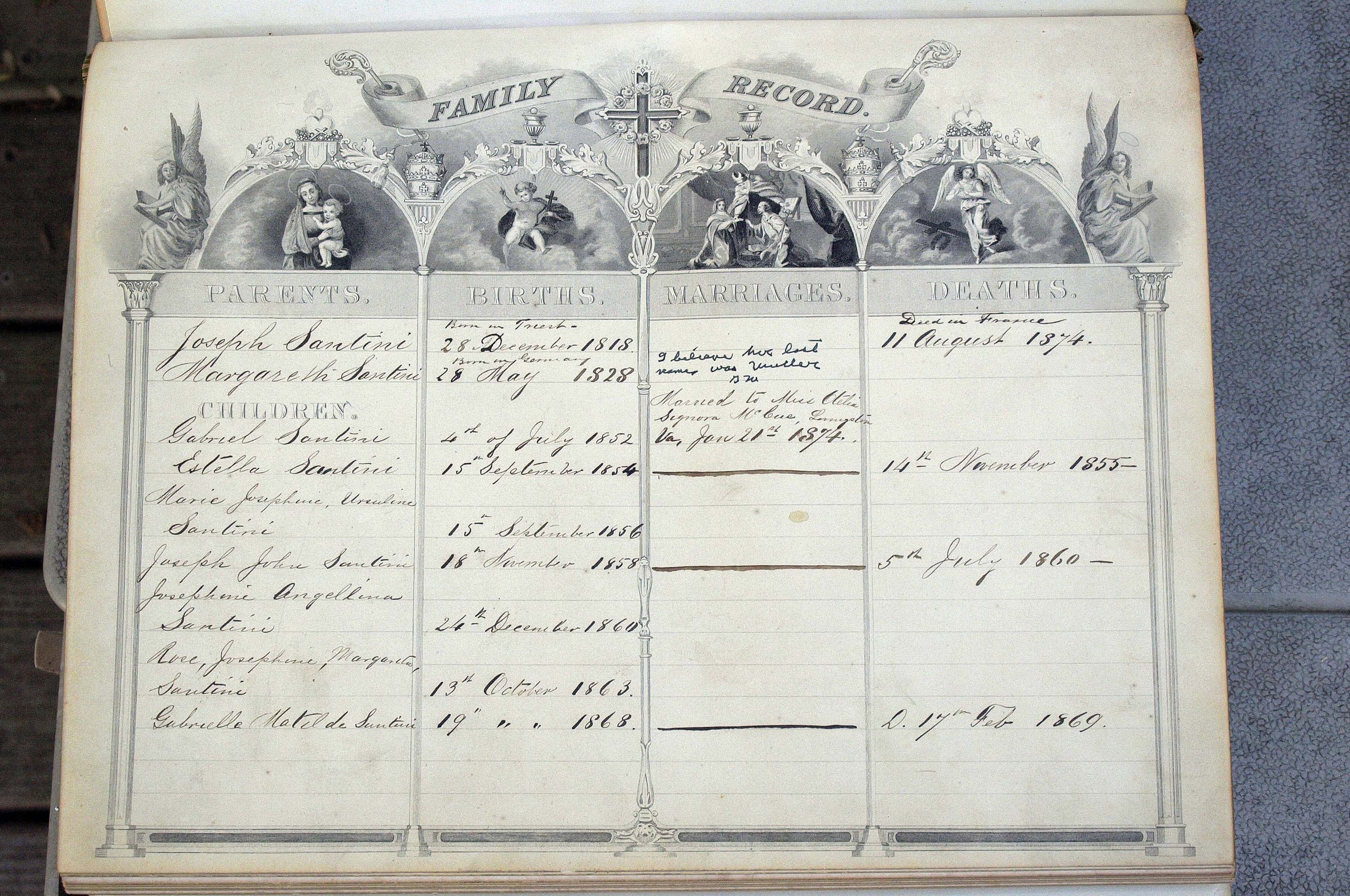 Gabriel Santini (1855-1890) was born at NOLA on July 5, 1855.  He was a very intelligent and artistically and musically talented man.  Garbriel Santini studied the law at Washington & Lee University in Lexington, Virginia. He graduated in 1872 and was awarded the Robinson Prize Medal.  Returning to New Orleans, Gabriel studied law at Tulane and graduated in 1874. By 1880, Gabriel Santini had passed the Virginia bar and was practicing law at Richmond, Virginia. (Tulane University Law School in 1874. (Source: Tulane University Catalogue, 1887-88)

Gabriel married Otelia McCue (1856-1884), the daughter of Judge John Howard McCue and Signora C.E. Wells of Augusta and Nelson Counties, Virginia.  They were the parents of Norita Santini (1874-1932).  Norita was reared at Biloxi by Margaretha Santini, her grandmother, and spinster aunts.  She attended college at the Industrial Institute and College, the precursor to M.S.C.W., at Columbus, Mississippi in 1893.  Norita Santini would marry William Henry Martin (1874-1938), an attorney, at Woodstock, Virginia in April 1901.(1880 Henrico Co., Virginia Federal Census R  1371, p. 43, ED 82 and The Biloxi Herald, July 1, 1893, p. 8 and The Daily Picayune, April 21, 1901, p. 16; Santini Family Bible and McCue family records-courtesy of Diana Martin Lehman-November 2013); and Catalogue of the Officers and Alumni of Washington and Lee University, Lexington, Virginia, 1749-1888)

Gabriel Santini left the legal field and began a career as a thespian and chanteur in light opera and theatre at New Orleans with R.D. McLean & Marie Prescott, a tragedy combination.  He had traveled to San Antonio, Texas with the Herbert Marsdon Troupe as leading man, but abandoned there when the musical company failed financially.  Gabriel found work with the San Antonio theatre and was employed there when he died on New Year’s Day 1890.  His corporal remains were sent to NOLA for internment.(The Biloxi Herald, January 4, 1890, p. 4 and The Daily Picayune, January 3, 1890, p. 4)

Marie Josephine Ursuline Santini (1856-1929) was known as Marietta Santini.  She was born September 15,  1856.  Marietta never married and expired in 1929 per a letter from Catherine Donnell that was sent to me by the Dunays before the Santini house was destroyed in 2005. (Dianan Martin Lehman-Needham, Massachusetts-November 2013)

Miss Josephine Santini taught public school at Biloxi.  When the school opened in October 1890, she was first assistant to J. Linn Ladd, the principal.  His salary was $100 per month while Josephine made $45 per month.  The other educators and their salaries were: Mrs. S. Booth-$40 per month; Edna Holley-$35 per month; and Mollie Rodenburg-$35 per month.(The Biloxi Herald, November 8, 1890, p. 4)

By January 1892, Miss Santini was teaching piano to Kindergarten children of Biloxi.  At the Philomathian Society of Biloxi acquired a Dunham piano from Philip Werlein of NOLA on generous terms.  The Philomathian Society had furnished the school with 400 books valued at not leas than $300.  In addition, their museum which included the Girardin Collection was valued at more than $1000.(The Biloxi Daily Herald, January 16, 1892, p. 4)

The Buildings of Biloxi an Architectural Survey, (City of Biloxi, Mississippi-1976).

Dear Mr. Bellande,
My name is Diana Martin Lehman and I am the great-great-granddaughter of Joseph Santini, founder of the Santini family of New Orleans and Biloxi.  I have done some fairly extensive research on the family over the years, and want to compliment you on the excellent and well-researched article you have posted.  Howver, the article contains a few inaccuracies and omissions that merit correction:
--Gabriel Santini (my great-grandfather) married Otelia (not Ophelia) McCue, the daughter of Judge John Howard McCue and Signora C.E. Wills of Augusta and Nelson Counties, VA. (Sources:  Santini Family Bible, McCue Family Record)
--Gabriel Santini graduated from Washington and Lee University in Lexington, VA, in 1872, where he was recipient of the Robinson Prize Medal. (Source:  Catalogue of the Officers and Alumni of Washington and Lee University, Lexington, Virginia, 1749-1888)
--Gabriel Santini graduated from Tulane University Law School in 1874. (Source: Tulane University Catalogue, 1887-88)
I can provide you with pdfs from the University catalogs (both are available for download from Google Books).
--There is no record of a Marie Santini as a member of this family in any of the documents I have found, including the Family Bible (which is in my possession).
I plan to order the LDS microfilm of Joseph Santini's 200-page will and estate documents sometime in the near future (Orleans Parish Civil District Court, docket #12793, LDS film #1503233).  It is possible these documents will provide clues to his origins and continued business dealings in France and Italy.  Family tradition holds that he had to leave Europe (he arrived in New Orleans on the Bark Amelia on 25 Feb 1845, having departed from Trieste) because of some threat from the "Black Hand."  Family tradition also maintains that his family had something to do with Napoleon Bonaparte.  Interestingly, Napoleon's most loyal servant was Jean-Noel Santini, a fellow Corsican who spent his final years as chief attendant to Napoleon's tomb at Les Invalides in Paris.
I have an interesting picture of Gabriel and other members of the family standing in front of the house ca 1872 that I could be of historical interest.  Please let me know if you want me to email it to you.
Sincerely,
Diana Martin Lehman

On more closely examining the photo I sent you of the Santini house, I've come to the conclusion that it was probably taken sometime around 1880 rather than 1872.  The child sitting on the lawn to the right is probably my grandmother Norita Santini Martin, who was born in 1874.  She looks to be about 6 or 7 years old in the picture.  The woman standing directly behind her may be her mother and my great-grandmother Otelia McCue Santini (b. 1853, d. 1884), though I see little resemblance to photos I have of Otelia.  In addition, Gabriel Santini looks older than 20 in this picture, probably closer to 30.

Attached are scans I made (and tweaked in Photoshop) of old photos from my grandmother's album.  I'd guess that the picture of Gabriel Santini and sisters and other household members in front of the Biloxi house was taken around 1872, when Gabriel was about 20.  He didn't marry my great-grandmother Otelia McCue until 1874, and there's no evidence of her in the picture.  I also included scans of portraits of Joseph, Gabriel, Rosetta, Josephine, and Marietta Santini in case you want to use them for the article.

The references for Gabriel's education are as follows:

I wish I had been able to visit Biloxi to see the house before it was destroyed by Katrina.  Is the impression I get from Google Street View correct that it has been replaced by some sort of enormous hotel complex?  While I'm sure that the reconstruction is good for the economy of Biloxi, it's still sad to see so much history obliterated and replaced by a Las Vegas-style structure.

Many thanks to you for your web site and your efforts to preserve the area's history.

Thank you so much for the newspaper story about my great-great grandmother's 99th birthday.  I had always assumed that Joseph Santini met and married her in Europe, so the story of her immigration with two brothers was quite a revelation.  Now I need to locate a record of her marriage to Joseph around 1850-51.

The Santini Family page on your web site looks very good, but I have a couple of requests.

The picture of Gabriel Santini isn't centered on the page, whereas the other pictures are.  Would it be possible to realign it and the caption?

Also, the Marie Santini who married John Courrege was not a family member, so could you delete the sentence about her?  The Marie Josephine Ursuline Santini who was b. 15 Sep 1856 (see attached) was Marietta Santini, whose picture I sent you.  She was never married and died in 1929 per a letter from Catherine Donnell that was sent to me by the Dunays before the Santini house was destroyed in 2005.  According to Catherine Donnell's letter, Marietta's sister Josephine Santini died in 1966 at the age of 105!

I'm attaching an image of the Bible Record with the birth dates for the children of Joseph Santini in case you wanted to add that information to the entries on them.

Thanks for everything, Diana