A turtle was taken from the St. John's River in Florida with the Spanish coat-of-arms and the date 1700 engraved on its back.  The turtle was released into the river with the added inscription: "Eastern Herald. Palatka, Florida, 1897".(The Pascagoula Democrat-Star, January 9, 1880, p. 2)

George Bills, Zio Benachi, Tony Benachi, George Andrews, Ed Musgrove, and the old reliable, Alex Bidault, left for Horn Island on board the Good Friday in search of sea turtles and their eggs. From the looks of their provision bill and 'snake bite cure' they will remain several days.(The Biloxi Herald, June 20, 1891, p. 4)

Joseph C. DeLamarre and Tom Cleary captured a turtle on Ship Island that weighed in excess of 700 pounds.  The large turtle required four men to turn it on its back.(The Biloxi Herald, June 11, 1892, p. 4) 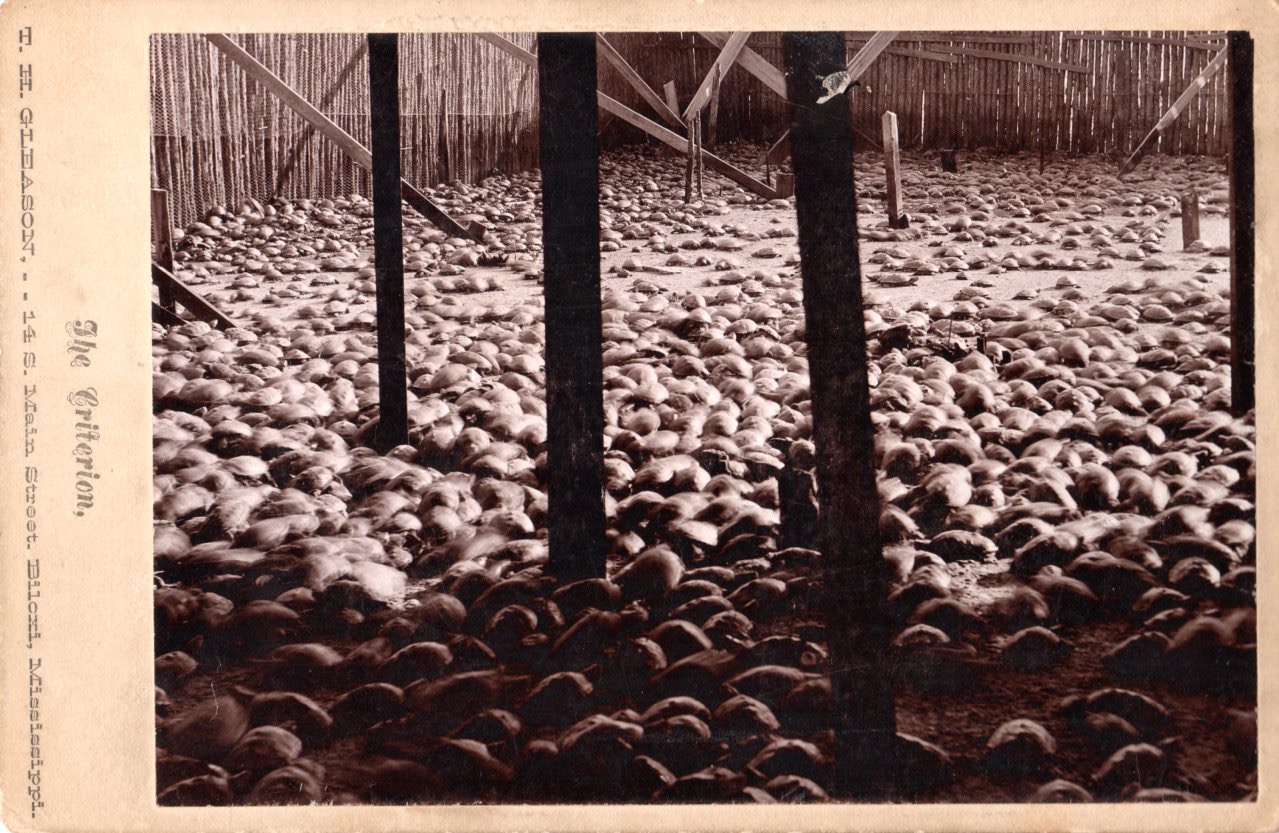 Since selling his pool room some time ago, John Eglin has fitted out a boat and sails the high seas and bayous in search of alligators and other large game.  On a trip to the islands this week, he captured two, monster sea turtles, each weighing close to three hundred pounds.  Both were butchered and sold as steaks and soup meats from the Eglin market.(The Ocean Springs News, June 17, 1911)

Last night, Joseph W. Swetman, Oscar Johnson, and 'Boy' Bennett visited Ship Island in quest of turtle eggs and returned this morning with a monster turtle weighing between 450 and 500 pounds and 1050 eggs.  This find of eggs is the largest that has ever been brought to Biloxi.  The turtle, which is of the green variety and the choicest of its kind, will be butchered tonight and distributed among the friends of the gentleman named above.(The Daily Herald, July 1, 1911, p. 8)

In July, J.W. Swetman aboard Tom, his motorized excursion boat, and with a crew of five turtle egg hunters captured a 501 pound turtle on Horn Island.  They saw two larger turtles than the captured that were to heavy to transport.(The Daily Herald, july 30, 1912, p. 8)

Captain Peter Kennedy running for the Lopez-Desporte Canning Company and aboard the Eva Foster brought a 300-pound green turtle to the wharf of the former plant of this company.  The large turtle was captured at Creole Gap where the vessel had been dredging for oysters.(The Daily Herald, September 21, 1912, p. 1)

William P. Kennedy while on a trip to the Chandeleurs aboard the Anna Long and with Captain Steve Sekul, George Williams, R.V. Abbley and R.V. Abbley Jr of Pass Christian, went into the water and physically captured a 200 pound sea turtle which was subsequently landed and killed for its meat. Barnacles on the dorsal side of the turtle caused slight injuries to the hands of the captor.(The Daily Herald, June 13, 1924, p. 3)

The C.C. Canning Company, William Cruso owner, who has been handling fresh water turtles has recently received such large orders that he sent a boat to Horn Island for sea and green turtles. Captain Eugene Ryan aboard the Radio caught ten sea turtles in his trawl that weighed 350 pounds each.  When processed at Cruso's factory 1250 pounds of pure turtle meat was recovered.  Cruso believes that he can develop a large trade in turtle meat and plans to sens a boat out at regular intervals.  Today he is shipping a carload of shrimp to New York.  Anthony Ragusin photographed the turtle catch.(The Daily Herald, June 23, 1932, p. 1)

In late June 1934, a party of fifteen returned from the Chandeleur Islands aboard the Louis B. Beaugez Jr. and landed in Ocean Springs at the John R. Seymour wharf at the foot of Washington Avenue with two, large turtles weighing in the 250-pound range.  Their backs were barnacle-covered.  The hunters also raided nine turtle nests recovering 100-130 eggs per nest.  The turtles were killed and the meat used locally.(The Daily Herald, June 25, 1934, p. 5)

Scientists keeping close eye on turtle nests.  Scientists are monitoring loggerhead turtle nesting sites in Pass Christian waiting to see if hatchlings will emerge. There is also a nest on Deer Island in addition to a few on Cat Island.(The Sun Herald August 11, 2013  p. 2-A)

Four Loggerhead turtles hatch on Pass Christian beach. Only recently have loggerhead turtles returned to this area to nest, Moby Solangi, President and Executive Director of the Institute of Marine Mammal Studies. (The Sun Herald September 19, 2013  p. 1-A) 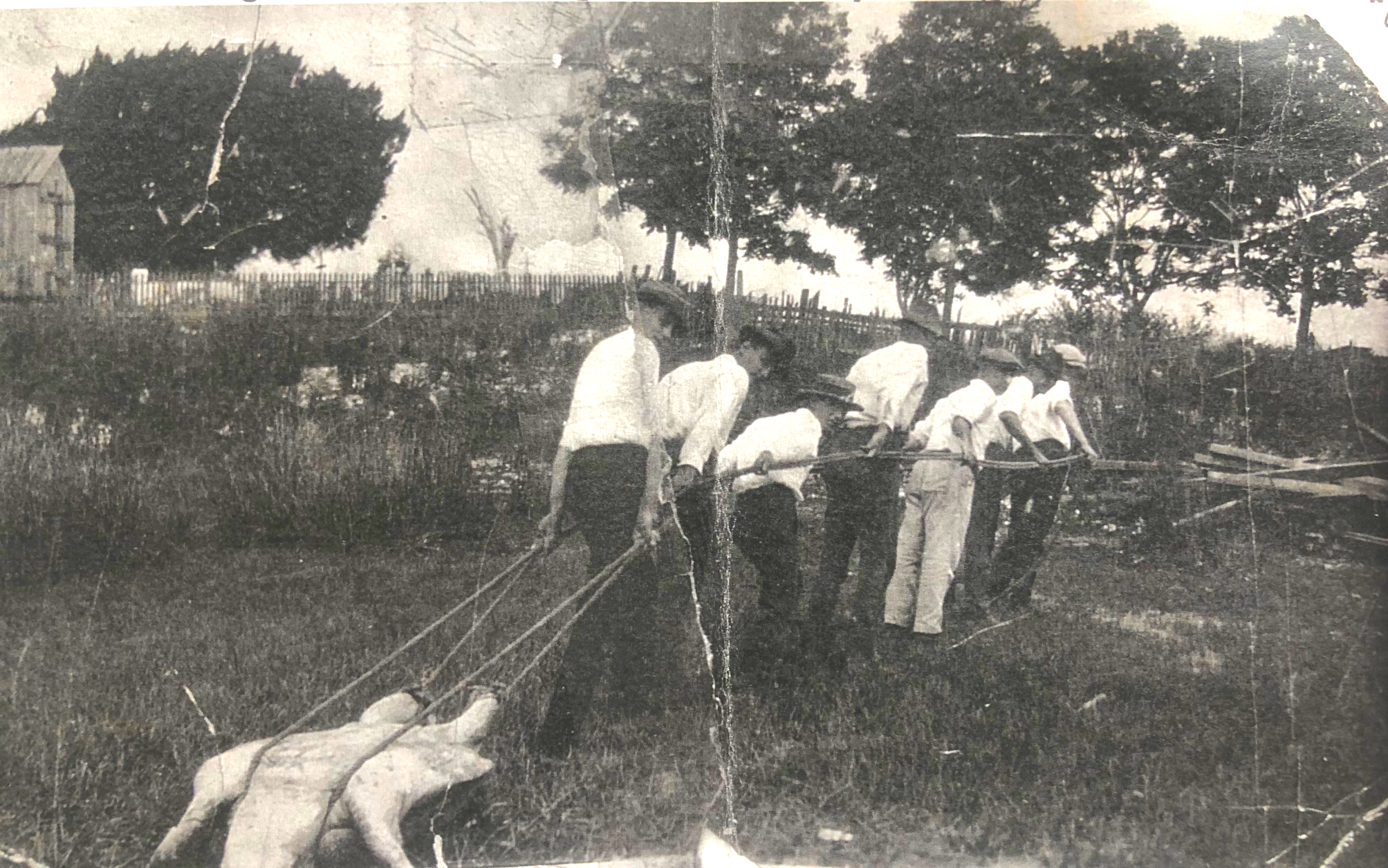 This [circa 1925] vintage image depicts a group of North Biloxi fishermen near the Fountain Cemetery demonstrating to their audience how to transport a captured marine turtle.  These large reptiles nested on Mississippi’s barrier island and their meat and eggs were exploited both for domestic and commercial use.  [L-R: Lawrence Beaugez [1889-1965]; Eugene Rodriguez [1898-1969]; Thomas Fountain [1903-1974]; Reno Beaugez [1893-1967]; Emile Tiblier; Boy Fountain; and Albert Fountain Jr.]  Image and identifications courtesy of Velma Beaugez Garlotte.

Along the Mexican Gulf, both marine and terrestrial turtles or terrapins were once hunted for their meat and eggs.  The barrier islands, especially Horn Island and Ship Island, were favored areas for turtle exploitation due to their propinquity to the populated coastline.  Although most of the turtle’s edible parts and eggs were for local consumption, there was some commercial development, especially of the ubiquitous diamondback turtle, which inhabits the estuarine marshes and rivers, of the southeastern United States.

The Thurston Canning Company, a factory to primarily process marine turtles from the western Caribbean, was erected at Bay St. Louis, Mississippi in the fall of 1917 by Harry J. Thurston [1881-1920], a native of Indiana.  Mr. Thurston expired at Houston, Texas in late February 1920 in the later years of the Spanish Influenza pandemic.[The Daily Herald, October 8, 1917, p. 5 and The Sea Coast Echo, February 28, 1920, p. 2]

Thurston’s testudine reptiles were transported by steamer to New Orleans and then to the Bay by train.  Here they were penned in the Bay of St. Louis and fed until slaughtered to make canned turtle soup, primarily for the demanding New York market.  About 5000 green, loggerheads, Mobilians and terrapins were processed annually.[The Daily Herald, May 1, 1918, p. 2]

The Endangered Species Act of 1973 and its amendments now protect the following marine turtles and their habitants: green; loggerhead; leatherback; hawksbill; Kemp’s ridley; and olive ridley.  Our local shrimp industry was directly affected and was required to use TEDS [turtle exclusion devises] to protect the Kemp ridley.