In 1959, Joe Moran while assisting his son turn a boat over, suffered severe injuries to his aorta and the displacement of his heart from its sac.  While hospitalized, his physician requested that he sketch boats.  Impressed with Joe's ability, the doctor enrolled him a home study art course.  By 1962, Mr. Moran realized that he would never have the physicality to build boats again.  He began to study art with William Steene.(The Mississippi Press, January 9, 1994, p. 12-C)
William Robert Steene (1887-1965) was born at Syracuse, New York on August 18, 1887.  He was a nationally known portrait painter and muralist. Steene studied under Colarossi and Julian in Paris, after his initial art education at the Art Students’ League and National Academy of Design in New York City. Among his portraitures possibly familiar to local residents are: President Franklin D. Roosevelt; Senator Theodore Bilbo of Mississippi; Governor Henry Whitfield of Mississippi; Dr. Karl Meyer, head of Cook County Hospital at Chicago; E.V Richards, president of the Navy League of America and Paramount Richards Theatres; and golfing legend, Robert Trent “Bobby” Jones.(Who’s Who in America, Vol. 31, 1960-1961 and Bradford-O’Keefe Burial Book 48, p. 245)
William Steene built a home and studio at Gulf Hills in 1950. In 1956, from his Gulf Hills studio, W.R. Steene completed a large mural depicting the 1953 Louisiana Sesquicentennial Celebration, a remembrance of the Louisiana Purchase of 1803, at New Orleans.  President Eisenhower is at the center of this 50-foot long, ten-foot tall, triptych mural, which took a year to complete.  The painting hangs in the Presbytery of the Louisiana State Museum at New Orleans.(The Daily Herald, “Know Your Coast”, November 15, 1957)
Clovinia Lucinda Ohr

Joe Moran, like his father, also built boats and in his later life became a nationally acclaimed painter.  Several of Mr. Moran’s works are in the Smithsonian Institute and two American presidents have acquired his art.(The Sun Herald, December 1, 1989, p. B-2 and The Sun Herald, March 24, 1999) 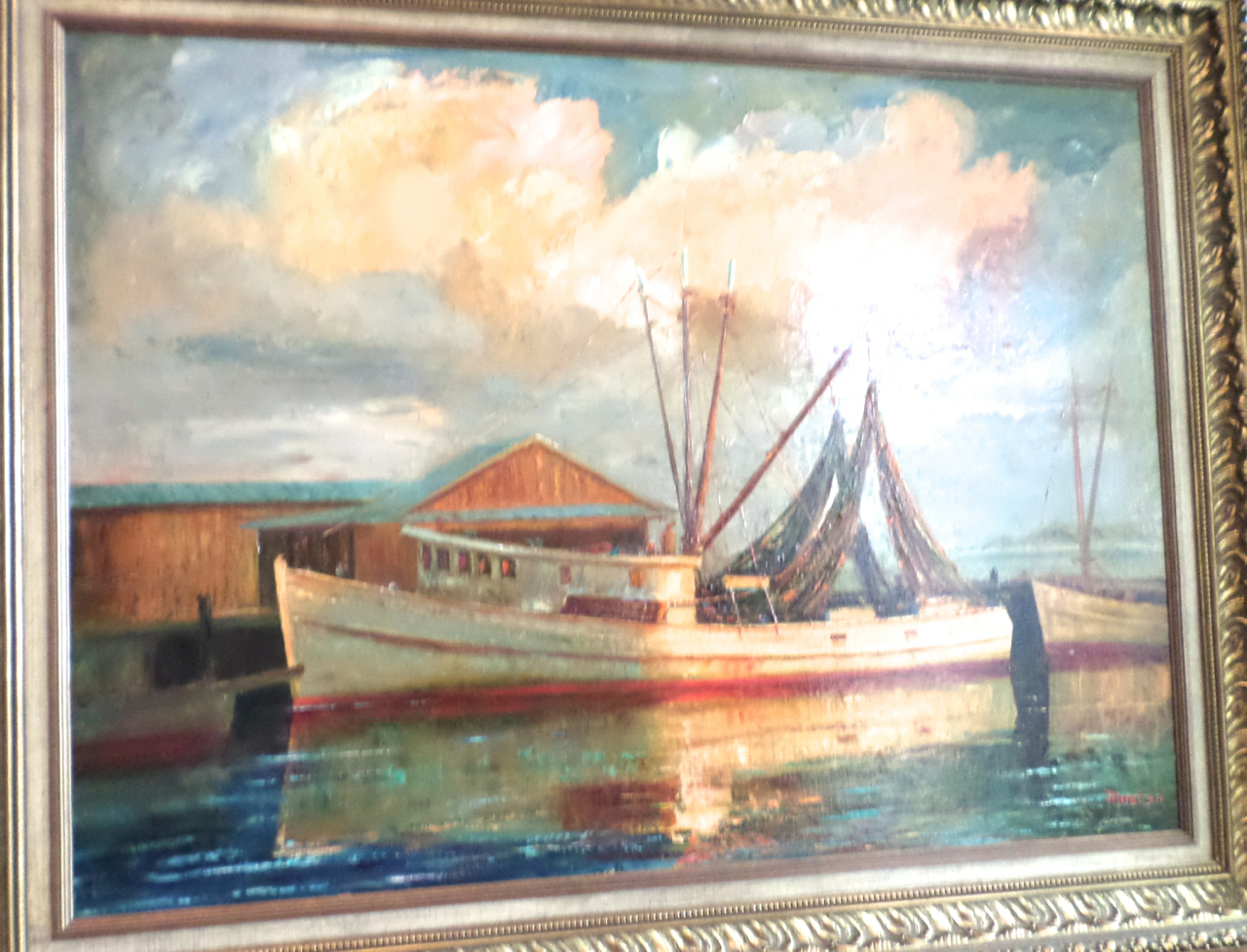 Agnew Painting
In October 1969, a Joe Moran (1915-1999) oil painting of Biloxi shrimp trawlers was presented to Spiro T. Agnew, vice president of the United States, for his assistance following Hurricane Camille of August 1969.(The Ocean Springs Record, October 23, 1969, p. 10)
In November 1974, Mr. Moran held an exhibit of his work at the Blossman Building on Washington Avenue in Ocean Springs, Mississippi.  Edward W. 'Woody' Blossman (1913-1990) was a patron of Joe Moran and acquired his paintings which are on public display in the Blossman Building.  Joe was named to the 1974 edition of Who's Who in Mississippi.(The Ocean Springs Record, November 21, 1974, p. 1)
Dorothy 'Dot' Davis
Born January 13, 1917 and died December 11, 2011

[on loan from Dennis O'Keefe' brother]