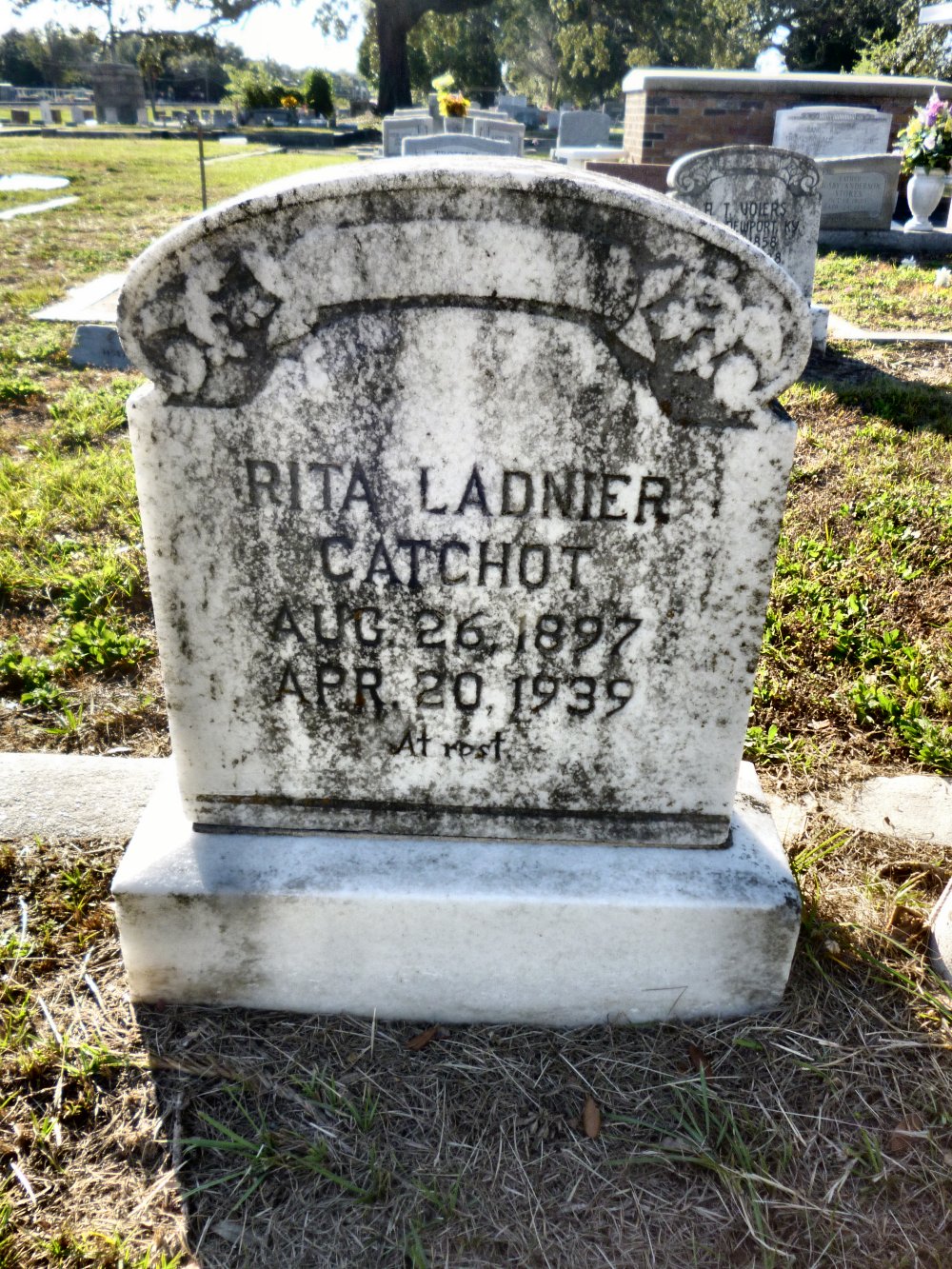 Antonio Catchot , of the Island of Malta, married Teresa Andervet (also spelled: Andrevet).  The said spouses lived in the middle of the 18th Century.  Francisco Catchot Andervet, the son of Antonio Catchot of Malta, came to Menorca about the year 1780.  This was during the Second Domination of Menorca by the English.  He settled at Mahon on the southeast coast of the island.  On May 5, 1781, he married Jeronima Neto Fontcoberta, the daughter of Jose and Angela.  Jeronima died on June 28, 1795.  The widower, Francisco Catchot, married a second time.  His bride was Margarita Morla Garcias, the daughter of Nicolas and Esperanza.  The wedding took place on August 6, 1795.   We find in Mahon the following children: 1. Teresa Catchot Neto (b. 2-23-1782); 2. Angela Catchot Neto (b. 2-13-1784); 3. Jeronima Catchot Neto (b. 10-5-1786); 4. Antonio Catchot Neto (b. 4-9-1788);  5. Jose' Catchot  Neto, was probably born outside of Mahon.  He was the husband of Eulalia Derany (also spelled Darany and Daran) Balduch, the daughter of Juan and Juana. Juan Derany was from Venice and in other documents it states he is from Corsica and Trieste.  Jose Catchot continued the first branch.  The children of the second marriage are as follows: 6. Nicolas Catchot Morla (b. 12-21-1797); 7. Maria Catchot Morla' (b. 1-8-1800); 8. Esperanza Catchot Morla' (b. 11-4-1801).  She married Juan Semidel Planas, son of Federico and  Maria; 9. Magdalena Catchot  Morla (9-27-1803); 10. Antonio Catchot Morla.  Did not encounter his baptism in Mahon.  He married Magdalena Taltavull Guivernau, the daughter of Jose' and Apolonia.  Antonio Catchot Morla' is the trunk of the second branch of the Catchot Family in Menorca. 11. Francisco Catchot Morla' was born outside of Mahon.  He married Teresa Portella Ruiz on May 23, 1829.  She was the daughter of Jose' and Margarita.  He makes the trunk of the Third Branch of the Catchot Family in Menorca.

First Branch of the Catchots in Menorca.

Second Branch of Catchots in Menorca

Third Branch of Catchots in Menorca.

Joseph Catchot passed in his sleep on October 15, 1913.  At this time, he was the cook aboard Sailor’s Joy, a fishing boat, anchored off Shell Beach, St. Bernard Parish, Louisiana.  Mr. Catchot resided at 321 East Washington Avenue in Biloxi.  He was survived by seven children and a brother at Ocean Springs.(The Daily Herald, October 17, 1913, p. 1)

Albert Catchot and family relocated from Bay St. Louis, Mississippi to Biloxi, Mississippi in 1905.  Here he worked as a motorman for the Mississippi Coast Traction Company.  He left this organization in May 1909 and went to work for H.T. Greaves in the Central Market of Biloxi.(The Daily Herald, May 8, 1909, p. 8)

Albert Catchot expired at Mobile, Alabama on April 21, 1915 from heart failure.  Albert had been in the oyster business in Alabama since 1911.  Albert had formerly worked for the Gulfport & Mississippi Coast Traction Company.  Mr. Catchot’s corporal remains were interred in the Old Biloxi Cemetery.  Emily F. Catchot died on December 7, 1920 at 423 Water Street, the residence of P.J. Gill, her son-in-law.

Juliette Eunice Lucille Catchot(1890-1909), called Juliet, was born July 14, 1890 at Bay St. Louis, Mississippi. She was educated at St. Joseph’s Academy also in Bay St. Louis and came to Biloxi, Mississippi with her family circa 1905.  Juliet contracted pneumonia and after a lengthy and courageous battle with this malady expired at the family home at 438 Copp Street on August 10, 1909.  Her funeral was attended by out of town guests: Henry French-Mobile; Aline Bermond and Mrs. Octave Fayard-Bay St. Louis; and Mrs. French-Pass Christian.(Lepre, 1995, p. 73 and The Daily Herald, August 11, 1909, p. 4)

Mack Catchot owned a lumberyard and was a building contractor.  He died at Orangevale, California on August 2, 1963.  Edith M. Catchot expired at Orangevale on April 14, 1964.  Their corporal remains are interred in the Calvary Catholic Cemetery at Sacramento, California.

John J. Bertucci was the manager of the Bertucci Produce Company.

Eura D. Catchot expired on December 12, 1957 at Biloxi, Mississippi.  Her corporal remains were interred in the Biloxi Cemetery.

Frank Bertucci (1859-19    ), an 1865 Italian immigrant, and Caroline Agnes Battafora (1867-1918), a native of NOLA, were the progenitors of the large Bertucci family of Gulfport and Biloxi, Mississippi.  They married at NOLA on June 3, 1882.  Caroline A. Battafora’s parents were also Italian immigrants.  The family name because of it many vowels has also been spelled as: Batafora, Battefora, Battafora, Battiforea, Battefore, Batfourro, and may have eventually changed to Batteford circa 1930.(NOLA MRB 9, p. 348)

Edwin A. Catchot died at Biloxi on October 31, 1976 and Azalie Weems Catchot expired at Biloxi, Mississippi on December 31, 1989.

Anthony C. Catchot expired at New Orleans, Louisiana on April 12, 1933.  His corporal remains were interred in the Greenwood Cemetery at NOLA.

In March 1905, Miguel Catchot was stricken with typhoid fever at Bay St. Louis and came to Biloxi to be cared for by his mother and family.  Mrs. Catchot resided at 417 Lameuse Street at this time.  Miguel did not recover from his ailment and expired on Lameuse Street on March 26, 1905.  His corporal remains were interred in the Biloxi Cemetery.(The Daily Herald, March 27, 1905, p. 6)

Circa 1924, Clarence married Ethel Steen (1889-1963) at NOLA.  She was the daughter of Thomas Jackson Steen and Emma Mead.  Clarence and Ethel had Charles Clarence Catchot, a son.  His daughters were:

In June 1917 when Robert F. Catchot reported his status to the draft board, he was employed as a soda dispenser with Kimbrough & Quints Drugs on Lameuse Street and Howard Avenue.  The family was domiciled at 109 West Jackson Avenue.

Shirley Redding Desporte passed on at Biloxi, Mississippi on April 30, 2011.  The Desportes were in the retail seafood at Biloxi for many years on Caillavet Street and Division Street.  Shirley and Junior Desporte were the parents of three children: Emile ‘Junie’ L. Desporte III (1947-2007) m. Angela M. Quave; Artie Wayne Desporte m. Christine ?; and Julia Desporte  m. Andrew Kessen.(The Sun Herald, May 3, 2011, p. A4 and May 4, 2011, p. A6)

Oliver Osborn Redding (1904-1982), called Osborn, was born at Crystal Springs, Mississippi on October 14, 1904, the son of Walter Armstrong Redden (1870-1935) and Francis Osborn.  Several of the Redden children, among them Osborn O. Redden, adopted the name Redding because it was often misspelled by the general public because of its similar sounding. (Walterene V. Redding, January 4, 2003)

Osborn Redding made his livelihood as a painting contractor.  He apprenticed as a painter with Charles R. Kostmayer (1881-1946) of Biloxi.  Prior to Mr. Kostmayer death, he left Osborn much of his painting paraphernalia.  Mr. Redding also inherited some of Kostmayer’s commercial clients, J.O. Collins and Lloyd T. Moon.  He later teamed up with Lloyd H. Catchot (1912-1995) and formed Redding & Catchot, painting contractors.   Among their employees was Ashley Schrieber (1919-2001).  O. Osborn Redding expired on June 21, 1982.  His corporal remains were interred in the Bellande Cemetery on Dewey Avenue in Ocean Springs, Mississippi.(Walterene V. Redding, January 4, 2003)

Emile P. Demourelle was born at New Orleans, Louisiana.  He had married Juliet Campos (1907-1980), the daughter of Manuel Campos and Marie Bronze (Bronzanotich) (1888-1957).  Juliet and Emile P. Demourelle had two children: Emile P. Demoruelle II (1929-1929) and James L. Demoruelle (1930-1989).  The Demourelles lived on Santini Street in Biloxi where he made his livelihood as an electrician.

Edgar J. Catchot divorced Agnes McDonald.  Circa 1921, Edgar J. Catchot married Mary E. ‘May’ McDermott (1890-1957), native of New Orleans and widow of Mr. Bardeau, whom she met in the Crescent City, as in 1920 she was living with her siblings on Cleveland Street next to his mother and brother.  They had Gloria Catchot (1922-2004), a daughter who was born circa 1922 and married Thomas C. Murphy.  May McDermott gave birth to Dorothy Bardeau (1912-1989) before she married Edgar J. Catchot.

The Daily Herald, “Mother protests against match as youth drives off”, March 18, 1911.