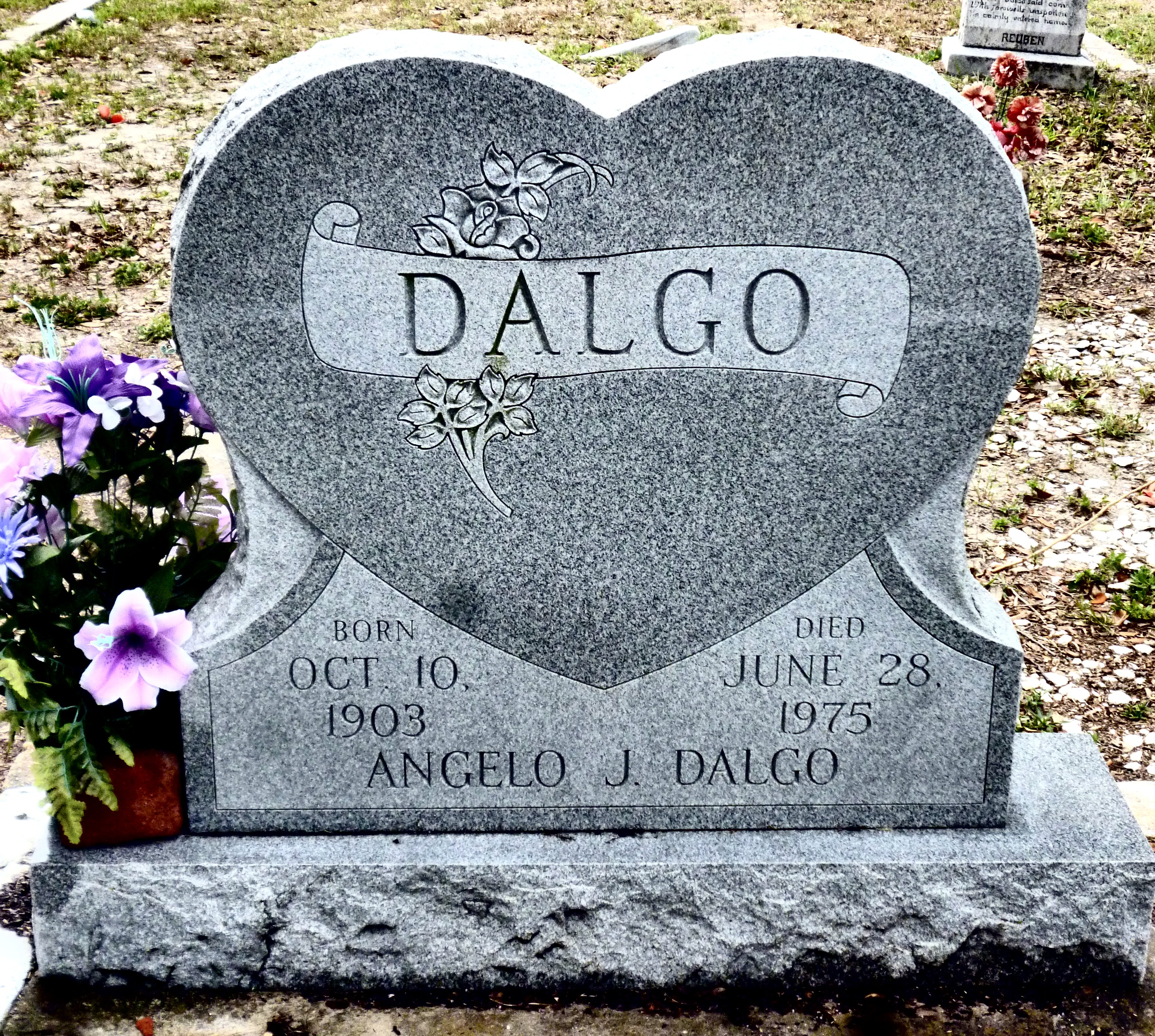 It appears that when the Anthony Hidalgo family migrated from Southwest Louisiana to the Mississippi Gulf Coast circa 1910.  In Mississippi, the family changed their name to ‘Dalgo’ from Hidalgo.

Merlin Beverly Dalgo (1916-2003), called Beverly, was born on December 29, 1916 at Ocean Springs, Mississippi.  He married Sarah Fuller (1917-1990), who was born October 31, 1917 at Gautier, Mississippi, the daughter of Fuller and      .  They were the parents of Linda Dalgo Bradford and Lawrence Fuller Dalgo.  Sarah F. Dalgo expired at Mobile, Alabama in October 1990.  M. Beverly Dalgo died at Gulfport, Mississippi on December 3, 2003.  There corporal remains are interred in the Gautier Cemetery at Gautier, Jackson County, Mississippi.(The Sun Herald, December 5, 2003)

After the demise of Lawrence Dalgo, Ethel T. Dalgo married Theodore D. Manuel (1878-1960), a building contractor.  Mr. Manuel had lived at New Orleans for many years.  They resided at 710 West Porter in Ocean Springs.  Mrs. Manuel was the organist at St. Paul's Methodist Church for twenty-five years.  T. D. Manuel died in October 1960.  His corporal remains were interred in the Biloxi City Cemetery.  Ethel passed on March 12, 1978.  Her remains were buried in the Evergreen Cemetery on Old Fort Bayou.(The Daily Herald, October 4, 1960, p. 2 and  March 14, 1978, p. A-2)

There is a high degree of certitude that Editha Comeaux Dalgo expired in childbirth of shortly thereafter as Anthony Hidalgo married Clarice Marie Leblanc (1873-1942) on September 2, 1895 at the Lafayette Parish, Louisiana Courthouse.  Their marriage was designated Cause No. 5445.(Hebert, Vol.    , p.   )

Ella Mae Dalgo Weems (1920-2014), age 94 years, of Biloxi, Mississippi passed away on Thursday, July 17, 2014, in Biloxi.  Mrs. Weems was a native of Biloxi, formerly a member of Epworth United Methodist Church and was currently a member of Heritage UMC. Along with her husband, they owned and operated Kelly's Upholstery and Surplus Store. She volunteered at Noahs Ark Kindergarten at Heritage UMC and at the Biloxi VA Hospital. Mrs. Weems was a member of many clubs and organizations including the North Bay Senior Citizens Club and the Biloxi Red Hat Society.  She was preceded in death by her husband, Kelly George Weems Sr, parents, Leon and Celestine Abel Dalgo, sister, Gloria and four brothers, Harold, Charles, Herbert and Rodney. Survivors include two sons, Kelly G. (Brenda) Weems Jr and Dan (Mary) Weems, three grandchildren, Desiree, Mark and Scott, two great-grandchildren, Sean and Declan, three nieces, Diane, Tracey and Toy, and three neighbors, Bubba, Teresa and Mattie.  The Howard Avenue Chapel of Bradford O'Keefe Funeral Home is in charge of arrangements.(The Sun Herald, July 20, 2014, p. A-15)

Charles William Dalgo (1921-2000) was born February 13, 1921 at Biloxi.  He married Lurlyn Maxine Bilbo (1922-1995), a native of Tulsa, Oklahoma, and the daughter of John Wesley Bilbo and Verna Flurry Bilbo.  They were the parents of two daughters, Lyn Dalgo Jay of Marble Falls, Texas and Cindy Dalgo Causey of Austin, Texas.

Felix Joseph Dalgo Jr. (1925-1989), called Junior, was educated at St. Michael's  parochial school and married      .  He became an amateur boxer training St. Michael's CYO  in the late 1930s.  By early 1949, he had fought in over 100 amateur bouts.  While in the US Navy serving in the South Pacific Theatre during WWII, Junior won the Southwest Pacific bantam weight crown in 1944 and 1945 at Honolulu, Hawaii.  By the winter of 1949, Junior had turned professional and was awaiting his fifth bought at the Colisuem Arena in New Orleans.  At this time, he weighed 118 pounds as compared to his military pugilistic career where his fighting weight was about 126 pounds.  Dalgo attributed his weight loss to his intense training and strenous labor while employed on a shrimp boat.(The Daily Herald, February 15, 1949, p. 4) 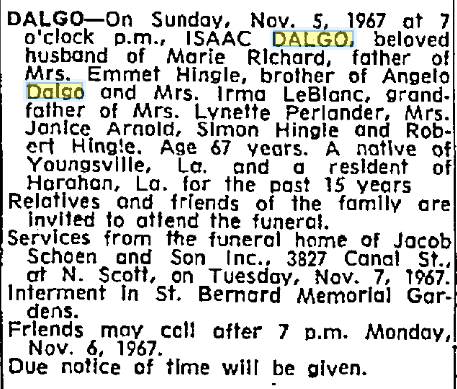 Isaac Dalgo (1900-1967) was born March 18, 1900 in Louisiana.  In 1917, when Isaac Dalgo registered for the WW I draft, he was living with his mother at 1026 Pearl Street at Biloxi, Mississippi.  He was employed as a ship caulker at the Diersks-Blodgett shipyard in Pascagoula.

By 1930, Isaac Dalgo was working as a boatman in the Biloxi seafood industry and domiciled on Maple Street with his wife and daughter, Rita Dalgo.(1930 Harrison Co., Mississippi Federal Census R 1146, p. 31B, ED 2)

Grace C. Dalgo expired at her home on Heidenheim Avenue on January 12, 1929, from blood poisoning.  Her corporal remains were passed through the Lutheran Church with the Reverend Stock officiating.  Burial followed in the Biloxi City Cemetery.(Bradford-O’Keefe Burial Bk. 15, p. 242     and The Daily Herald, January 14, 1929, p. 2)

Helen Grace Foretich, age 83 years, of Biloxi, passed away on July 20, 2017, at the Ocean Springs Nursing Center.  Helen is preceded in death by her husband, Alvah E. Foretich Jr., daughter, Sharon Sue Foretich Nixon (1954-2005) m. Walter Louis Nixon III (1954-2007), grandson, Walter Louis Nixon IV (d. 1995), and parents, Angelo and Gladys Dalgo. Survivors include her daughter, Angela Soren, grandchildren, Alyssa, Hannah and Kayla Soren, and sister-in-law, Mattie Dalgo.  On bequest of the deceased there will be burial only at Biloxi National Cemetery on Monday, July 24 at 10:00 a.m.  The Ocean Springs Chapel of Bradford O'Keefe Funeral Home is in charge of arrangements.

In 1930, Angelo Dalgo was working as an oyster fisherman.  He and his two sons were living with the Henry Canaan family on Heidenheim Avenue at Biloxi, Mississippi.  In 1918, Henry Canaan was a boatmen for the Foster-Fountain Packing Company.(1930 Harrison Co., Mississippi Federal Census, R1146, p. 9A, ED 1 and Jerry Dalgo, November 19, 2006)

Emanuel Hidalgo was born circa

Mozard Hidalgo was born circa

The Ocean Springs News, “Bradford-Dalgo wedding in Mobile is interest to many in Ocean Springs”, June 26, 1958.