At , Eugene Bakeler was initially engaged in the restaurant business opposite the L&N Depot.  In June 1894, Mr. Bakeler exhibited a large red snapper frozen in a 300-pound block of ice by the Hygeia Ice Works.  The Piscean sculpture made an attractive exhibit.(The Biloxi Herald, June 30, 1894, p. 8)

By 1900, Bakeler had established a general news, tobacco and cigar business on .  Eugene Bakeler had commenced his business career as a check boy in the store of D.H. Holmes, and rose to the position of salesman at the age of eighteen.  Mr. Bakeler came to  in the late 1880s from NOLA.  He served as alderman under ex-Mayor Ladnier's [Laudner] administration and made a good reputation as such.  He always had a fascination for the news business, buys direct from the publishers and has the finest establishment of its kind on the Gulf coast.
After the destructive fire of November 1900, Eugene Bakeler was the first doing business in the burnt district which speaks well for his pluck and enterprise.  He was not selfish, but attributed his business success largely to his estimable wife.  Mr. Bakeler was a strong advocate in the election for the Gulf & Ship Island Railroad, and believed in the future prosperity and greatness of . Mr. Bakeler was a member of the Knights of Honor.  He expired at  on April 25, 1923.  Maria Chevally Bakeler died on January 6, 1940.
The Biloxi News Company
433 Reynoir Street
E. Bakeler   M.A. Bakeler
Newspapers Magazines Periodicals
Tobacco, Cigars, and Smokers' Articles 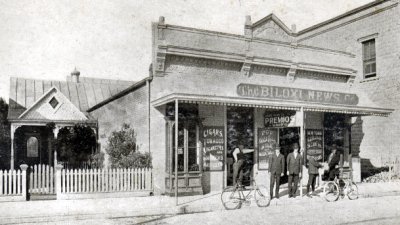 BILOXI NEWS COMPANY
The home next door is the Bakeler residence at 431 Reynoir.  Eugene Bakeler and Marie A. Bakeler were the parents of Albert L. Bakeler (1889-1973).  He worked in the shop as a clerk.
note from sherry morrish <s.morrish913@gmail.com> on May 14, 2014
My mother was Mildred Agnes Bakeler, or Inez Thomise Bakeler (official birth certificate-Biloxi MS),( April 24, 1926-Jan 6, 2007). Since the Arthur Bakeler family broke up in 1930, theIr boys, ARTHUR and ALFRED were sent to an orphanage where life was harsh. Mildred lived with several relatives in a short amount of time, and finally lived with the Albert Bakeler and Teresa Summreal family, with sole cousin Verne, and Albert's mother Adoraline Marie Chevalley Michel (1940).
There was also an older brother to Arthur named  Joseph(1899), born to Eugene's first wife, Laura Hasling (1866). Arthur Jr and Alfred set up household when Arthur aged out of the orphanage (1938) and brought his younger brother with him. Although Mildred does not show up on the 1930 census, in a subsequent census dated 1930, she does appear as a resident of the Albert Bakeler household. Mildred graduated from the local Catholic girls school in Biloxi in 1944. She worked briefly in civil service at the Military base, but left soon after to New Orleans' L'hotel Dieu, where she enrolled in the Nurses Corps, supporting the war effort . She left upon graduation for San Diego Ca 1948, to work in a hospital. She was estranged from most of the Arthur Bakeler family for the rest of her life. She did maintain family relationships with Albert and Teresa Bakeler, her uncle and aunt, and especially Floyd and Verne Lamas.  There are 3 Bakeler adult children from Verne and Floyd.
REFERENCES:
Directory, ,Volume 1, 1905, (The Biloxi Daily Herald Printery: Biloxi-1905), p. 40.
Circuit Court, "State v. Eugene Bakeler", October 1909.