Croatian arrivals from Solta-Cecich and Garbin. 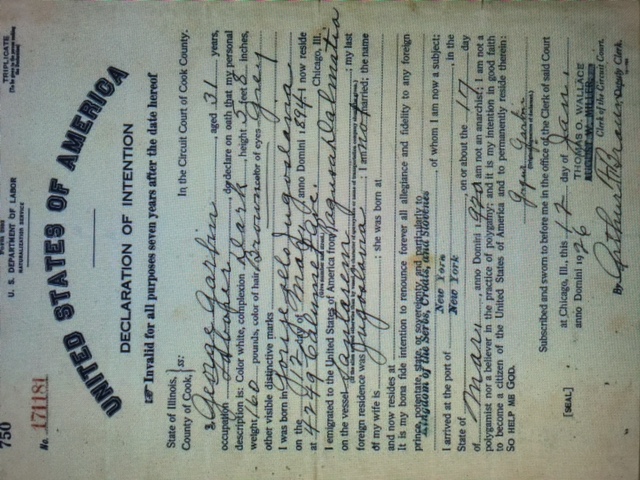 Joseph [Jozo] Cecich (1888-1965) was born September 4, 1888 at Grohote, a town on the island of Solta, Split-Dalmatia County, Croatia.  Solta is west of Brac in the Dalmatian Archipelago.  Joseph Cecich arrived at New Orleans on January 28, 1905 aboard Irene, a vessel that had left the port of Trieste.  In April 1912, he filed his declaration of intention to become an American citizen while domiciled at 1921 Decatur Street in the Crescent City.(Declaration of Intention, Certificate No. 953-Southern District Court-South Mississippi) 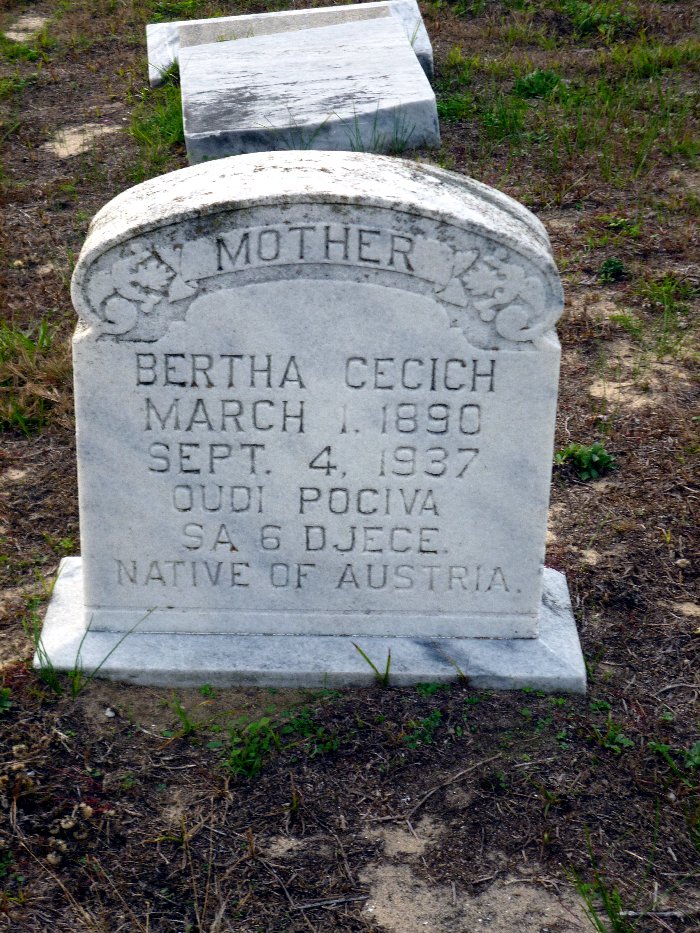 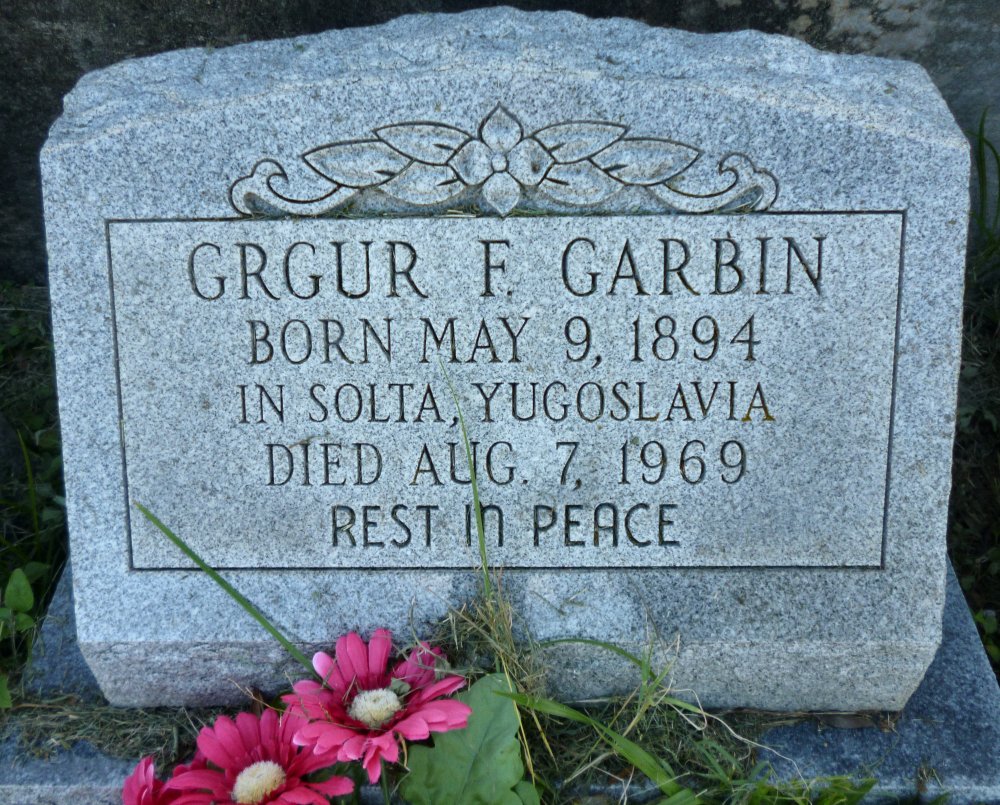 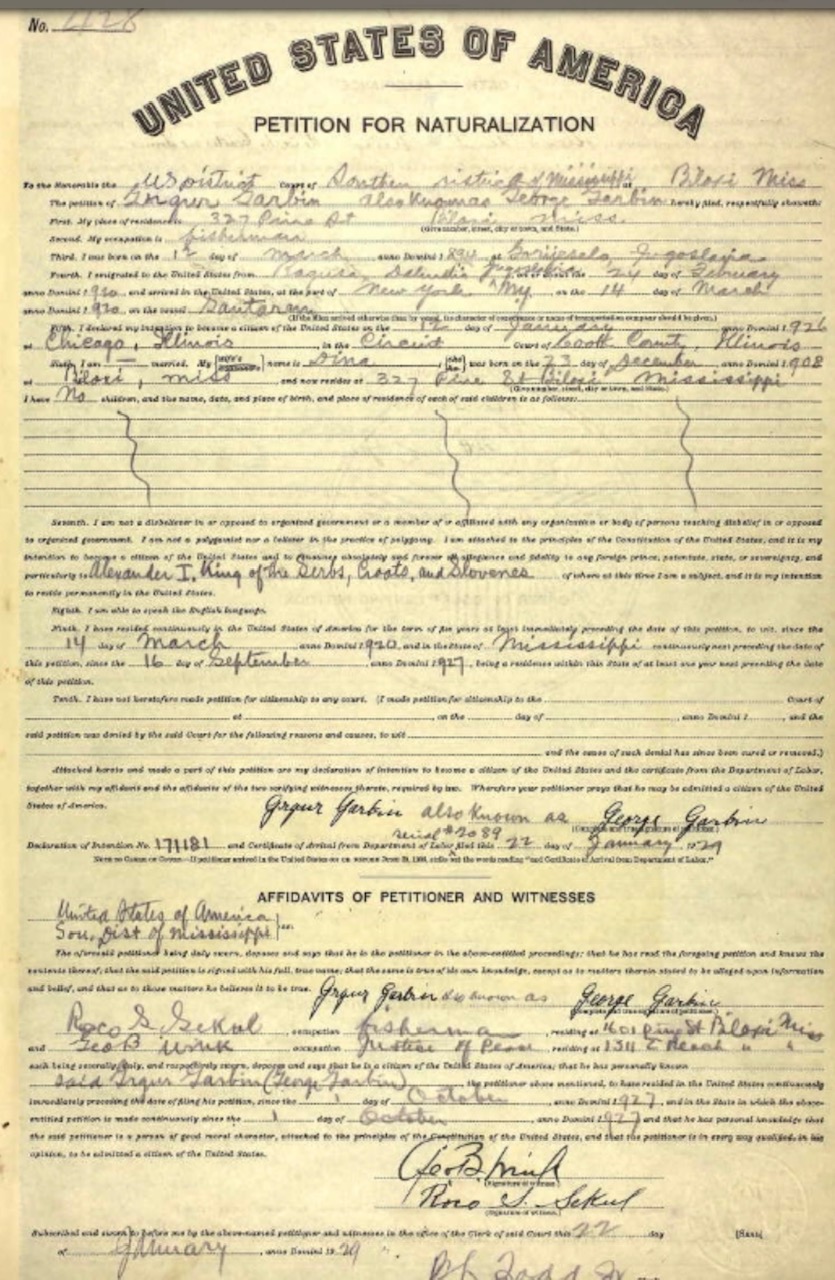 Grgur [Grego] Garbin (1893-1969) was the progenitor of the Garbin family of Biloxi, Mississippi.  He was born on Solta, County Spilt-Dalmatia, Croatia and made his livelihood at Biloxi, Mississippi as a fisherman.  On June 6, 1928 in Harrison County, Mississippi, Grgur Garbin married Danich Victoria Pavlov (1908-1996), the daughter of Peter Pavlov (1882-1951) and Anna Hire Pavlov (1881-1962), both Croatian immigrants.  The newly weds made their home at 1620 Third Street on 'The Point'.  Danica was a seafood worker and labored for sixty years with the Sea Coast Packing Company and Kuluz Brothers.(Harrison Co., Mississippi Circuit Court MRB 40, p. 296 and The Sun Herald, January 3, 1996, p. C2)

Peter M. Garbin (1930-1963) was born at Biloxi on September 8, 1930.  He died at the United States Public Service Hospital in New Orleans Friday on September 27, 1963.  Peter had made his livelihood as a commercial fisherman fishing out of Tacoma, Washington, for the past ten years.  He  attended Notre Dame High School in Biloxi and was a member of St. Michael's Catholic Church.  He was survived by his parents, Mr. and Mrs. George Garbin; three brothers, Dr. Frank G. Garbin, Puerto Rico; Joseph Garbin, Reserve, Louisiana; and George G. Garbin, Biloxi; and one sister, Mrs. Earl Carpenter, Bainbridge, Maryland.  His funeral was directed by Bradford-O'Keefe Funeral Home of Biloxi. Internment in the Biloxi Cemetery followed his Requiem Mass at St. Michael's Catholic Church.(The Daily Herald, Seeptember 27, 1963, p. 2) 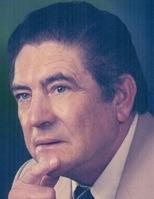 After graduation, Dr. Garbin attended Spring Hill College in Mobile, Alabama where he earned his Bachelor of Science Degree in 1951. In 1955, he graduated from the University of Tennessee College of Medicine with his Doctorate in Medicine. He completed a rotating internship at St. Joseph's Hospital in Memphis, Tennessee; it was during this time that he met his wife of fifty-three years, Nitza (Betancourt).

Following his time in Tennessee, Dr. Garbin served in the United States Air Force as a General Medical Officer from 1957-1959. While serving, Dr. Garbin and his wife Nitza had their first two children, Nilda and Donna. From 1960-1964, he completed his General Surgery Residency at the San Juan City Hospital in San Juan, Puerto Rico.

While in Puerto Rico, Dr. and Mrs. Garbin had their next two children, Sharon and Frank Jr. Dr. Garbin and his family moved back to Mississippi in 1964, where he lived for the remainder of his life. It was in Mississippi that the last two Garbin children, Paul and Paulette, were born. During his free time, Dr. Garbin loved to spend his time outside, preferably on the water fishing. Frank was a loving father, grandfather, and great-grandfather, and he will be missed by all that knew him.

Dr. Garbin is preceded in death by his wife, Nitza Garbin, his parents, Grugur and Danica (Pavlov) Garbin, and his brother Peter (DeeDee) Garbin.

The family of Dr. Garbin wants to extend a special thanks to Katrina Campbell (also known as "Skinny" by Dr. Garbin), as well as Mary Lee, Janice Powell, Janay Campbell, and Lisa Rials. This army of angels loved Dr. Garbin, and he loved them like his own children.

A Mass of Christian Burial will be held on Monday, November 26, 2018 at 11:00 am at Holy Family Catholic Church, Pass Christian where friends may visit one hour before the mass.  Bradford-O'Keefe Funeral Home, 15th Street Gulfport is in charge of arrangements.[The Sun Herald, November 23 to November 25, 2018]