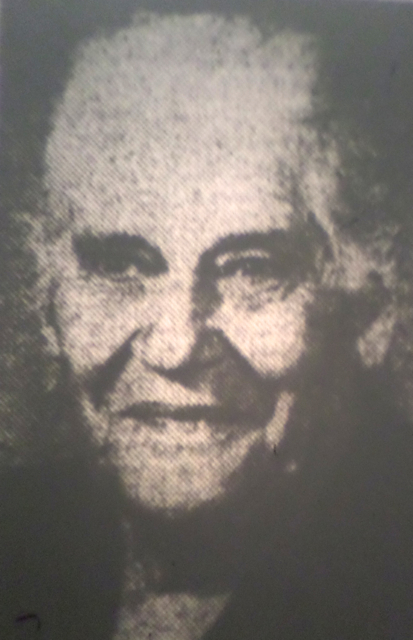 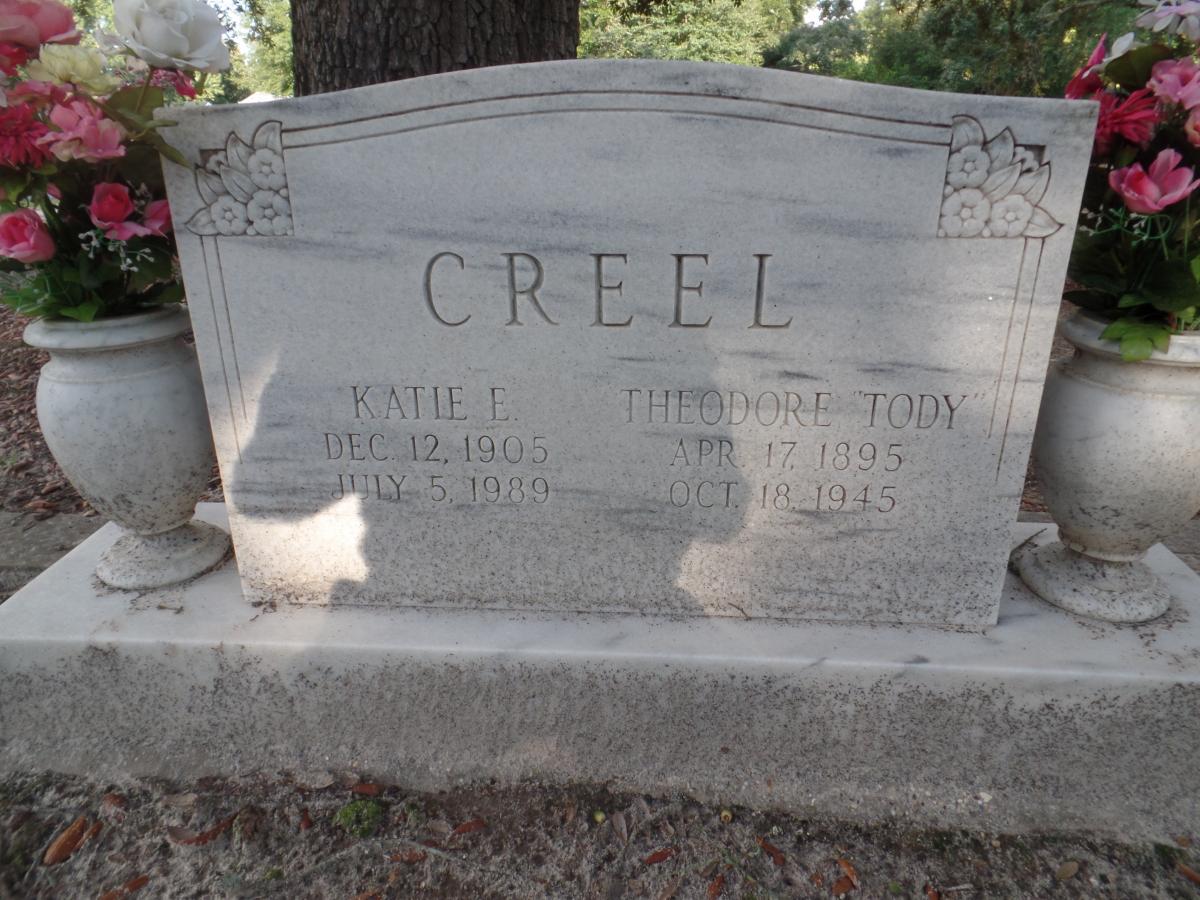 Katie Ellis Creel became a widow in 1945.  She made her livelihood as a nursing assistant at Keesler AFB.  She was a member of the 8 & 40 Club, the American Legion auxiliary and the St. John’s Altar Society.  She expired at Biloxi on July 5, 1989 and was survived by a daughter, Lurline Creel Little of Wichita Falls, Texas; four sons: Theodore A. Creel of Topeka, Kansas; Norman J. Creel of Biloxi; Elwood T. Creel of Latimer, and Larry Creel of Ocean Springs; two sisters, Agnes Ellis Cottrell of and Elizabeth Ellis Kilpartick of Ocean Springs; two brothers, Joseph Ellis of Ocean Springs and Jimmy Ellis of Biloxi; 27 grandchildren; and eight great-grandchildren.(The Sun Herald, July 7, 1989, p. B-2)

As a young man, Joseph A. Ellis worked in the seafood industry on oyster and shrimp boats.  By the 1930s, he had become a saloon keeper and restaurateur.  One of his first ventures was the Blue Heaven Beer Garden which was located on the shell pile at the foot of Lameuse Street.  Ellis opened the Brass Rail in the fall of 1934 in the Vignes Building at 110 West Howard Avenue.  It served lunches and had a beer saloon.  The Brass Rail also had bands like the Merritt Brunes Orchestra perform there.(The Daily Herald, September 21,1933, p. 2 , October 23, 1934, p. 2 and November 7, 1934, p. 2)

In 1962, Mr. Ellis became the owner, operator and director of the American Beauty College.  His other business endeavors include a land investment business and rental properties in Gulfport.

Joseph A. Ellis was a civic oriented person and he had memberships in the following: Governor’s Staff and served as the Harrison County coordinator for the Governor’s Staff; Carpenter’s Local Union; past president and board of directors of the Biloxi Lions Club; member of the Elks Club; four year term on the Law Enforcement Assistance Association; and a member of the Gulfport Community Development Commission.(The Sun Herald, May 15, 1994, p. A-2)

Bradford-O’Keefe Funeral Home of Biloxi directed funeral services for the Ellis family with interment in Southern Memorial Park.(The Sun Herald, May 15, 1994, p. A-2)

Agnes is survived by her husband of 71 years, Lester; son, Gary and wife Peggy; 2 grandchildren, Todd, Brent and wife Leslie; great-granddaughter, Joslynn. She is preceded in death by 8 siblings.(The Sun Herald, September  30, 2011)

P.J. Ellis was former proprietor of the Ellis Battery Shop.  He joined the pipe department at Ingalls Shipbuilding where he worked until retirement.  Mr. Ellis was a member of Magnolia Lodge No. 120 F & A.M.  Peter John Ellis died at Biloxi on Saturday, March  1985.  He was preceded in death by his parents, Mrs. and Mrs. Jim Ellis and Toni Ellis Glavan, a daughter.  P.J. Was survived by his spouse; two daughters, Sherri Ellis Pitalo and Levon Ellis Broussard, both of Biloxi; five sisters: Agnes Ellis Cottrell and Elizabeth Ellis Kilpatrick; both of Ocean Springs; Katie Ellis Creel, Vickie Ellis Page; and Lillian Ellis Acevedo, all of Biloxi; two brothers, Joseph A. Ellis of Ocean Springs and Jimmy Ellis of Biloxi; and five grandchildren.  Bradford-O’Keefe Funeral Home of Biloxi provided the Ellis family with funeral arrangements and internment in Southern Memorial Park.(The Daily Herald, March 25, 1985, p. A-2)

Ariel Hurley Ellis, age 77, years passed at Biloxi, on Thursday, February 1, 2001.   Mrs. Ellis was born in Biloxi, January 12, 1924 and was a lifelong resident of the Coast. She was a homemaker and loved spending time with her family. Cherished are the fond memories of many summers together in Gulf Shores," Alabama. Mrs. Ellis was preceded in death by her beloved husband, P.J. Ellis; her daughter, Toni Ellis Glavan; her parents, Leon "Cutie" and Voncile Hurley; and sister, Verbie Gallina.  Survivors include two daughters and three sons-in-law, Sherri and Kenny Pitalo, Levon and Greg Carroll, and Herbert Glavan; five grandchildren, Kenny and Sheri Glavan, Stacie Broussard, Kelly and Stephanie Pitalo; two great-grandchildren, Ken and Toni Glavan; two sisters, Nona Hendren and Kay Nunley; and Ariel's very special caregivers, Terry Waters, Jean Cooley, Sharon Casey and staff.  A memorial service will be held at Heritage United Methodist Church on Popp's Ferry Road in Biloxi. Inurnment will be held at a later date in Southern Memorial Park Cemetery. The Howard Avenue Chapel of Bradford-O'Keefe Funeral Homes in Biloxi is in charge of arrangements. (The Sun Herald, February  2001)

Elizabeth V. Kilpatrick (1924-2010), age 85 years, of St. Martin-Ocean Springs passed away on Friday, April 30, 2010 at his daughter's home surrounded by family. She was a loving mother, grandmother, friend, and devoted Catholic.

Mrs. Kilpatrick was born on June 21, 1924, to the late Sarah and James Ellis. Many remember her as the lady that made donuts in Winn-Dixie deli. Her grandchildren nicknamed her as Maw-Maw Donut. She will be missed very much by many.   She is preceded in death by her husband of 62 years, Paul Bailey Kilpatrick (1923-2008); two great-granddaughters, Candice Polite and Chanley Gray. She is survived by his six daughters and three sons, twins, Sheila Gray (Jerry) and Sylvia Dimitry (Thomas), Denise Koon (Mike), Vickie Charpie (Beaver), Kay Arnold (Mike), Tina Shoemaker (Bruce), Michael Kilpatrick (Jackie), Ronald Kilpatrick (Jean), Dennis Kilpatrick (Barbara); sister, Agnes Cottrell (Lester) 25 grandchildren, 25 great-grandchildren, and numerous other relatives and friends.   Funeral Mass will be Wednesday, May 5, 2010, 2:00 p.m., at Christ The King Catholic Church in Latimer with Father Thang Pham officiating. Visitation with the family will be one hour prior to the service. Private burial will be at Biloxi National Cemetery. Arrangements made by O'Bryant-O'Keefe Funeral Home in Vancleave, Mississippi.(The Sun Herald, May 2, 2010)

Paul Bailey Kilpatrick(1923-2008) age 85 years, of St. Martin-Ocean Springs passed away Friday, May 23, 2008 at his daughters home surrounded by family. Mr. Kilpatrick was born February 14, 1923 to the late Tom and Grace Kilpatrick in Temple, Oklahoma. He served in the United States Army Air Corps during WWII. He and his family moved to the coastal area in 1955. After retiring as a machinist and owner of P&D Tool and Die, Paul built Ocean Lanes and operated the business until he retired in 2000. In addition to his parents he was preceded in death by his brother Leon Kilpatrick and two great-granddaughters, Candice Polite and Chanley Gray. He is survived by his wife of 62 years, Elizabeth Ellis Kilpatrick of St. Martin; six daughters, twins, Sheila Gray (Jerry), Sylvia Dimitry (Thomas), Denise Koon (Mike), Vickie Charpie (Beaver), Kay Scarbrough (Mike Arnold), Tina Shoemaker (Bruce); three sons, Michael Kilpatrick (Jackie), Ronald Kilpatrick (Jean), Dennis Kilpatrick (Barbara); brother, Tommy Kilpatrick; 25 grandchildren and 22 great-grandchildren and numerous other relatives and friends. Funeral Mass will be held Wednesday, May 28, 2008 at 12 noon at Christ the King Catholic Church in Latimer with Father John McGrath as celebrant. Family will receive friends one hour prior to service. Interment will follow with military honors at Biloxi National Cemetery at 1:30 p.m. Arrangements by O'Bryant-O'Keefe Funeral Home, Vancleave, Mississippi.(The Sun Herald, May 27, 2008)

Mr. Gollotte was a retired engine man in the US Navy. He and Lillie C. Ellis Gollotte lived at 618 Crawford Street and were the parents of two children: Jenny Gollotte Tiblier Matthews of Jackson, Mississippi and Howard T. Gollotte Jr. of Jackson, Mississippi.  Lillian died at the USAF Medical Center at Keesler AFB in Biloxi on November 4, 1971.(The Daily Herald, November 6, 1971, p. 2)

George Otto came to America arriving at the Port of New York on May 30, 1900, embarking from Lebanon. In April 1919, he made his declaration to become an American citizen at Biloxi, Mississippi. At this time, he was not married and lived at 473 Division Street. George Otto became an American citizen [certificate number 1511950) on June 11, 1923.(Declaration of Intention No. 600-South Mississippi Federal Court-April 1919 and Petition for Naturalization No. 292-South Mississippi Federal Court-March 1922)

George Otto (1879-1959), age 80 years, a native of Beirut, Lebanon, resident of 653 Forrest Avenue, and a former Biloxi merchant, died at 5:30 a.m. today at his home.  O'Keefe Funeral Home of Biloxi directed the services of Mr. Otto with entombment in the Biloxi Cemetery.

Salim 'Sam' Poulos (1867-1941), a native of Zeghorta, Lebanon and Theresa Artbanie (1880-1964) were the founders of this family at Biloxi, Mississippi.  Sam came to America in 18 Came to Biloxi circa 1906 where he made his livelihood in the grocery business.  he had previously been in the mercantile business at St. Martinville and New Orleans, Louisiana; Birmingham and Moblie, Alabama; and other locales.  Mr. Poulos retired from bsiness in 1926.  He expired on 1941 at his home at 803 Caillavet Street. 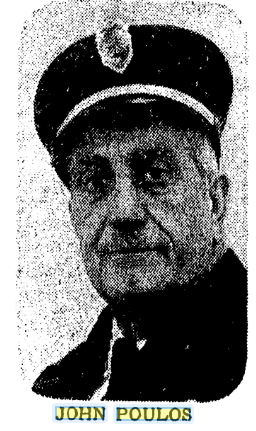 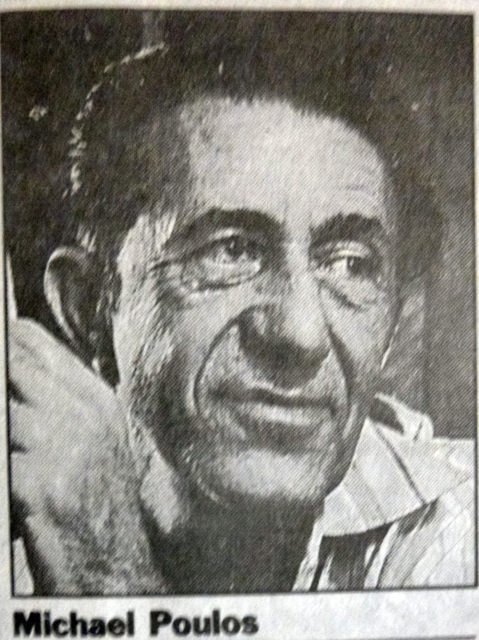 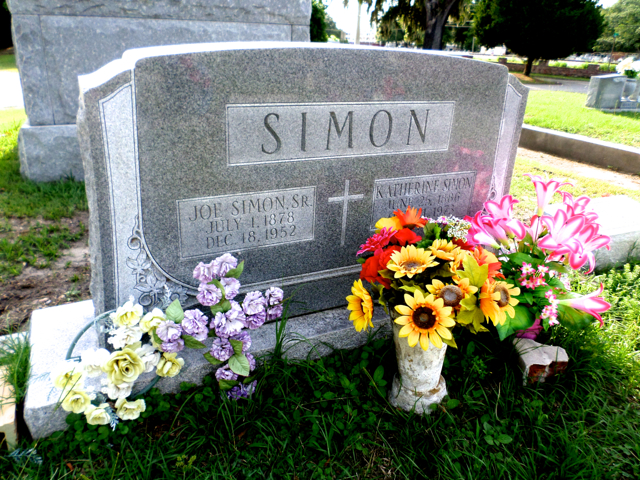 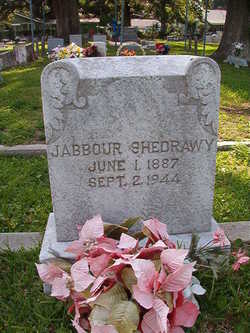 Jabbour Bedewy Shedrawy (1889-1944) was born on February 27, 1889 at Ehden, Ash Shamal, Lebanon, formerly Syria.  Ehden, a mountain town is located 4,900 feet above sea level, and is 19.1 miles from Zgharta, 68 miles from Beirut, the capital, and 24 miles from Tripoli, Lebanon.  It is a famous summer resort and tourist center, often called "the Bride of Summer Resorts” in the North of Lebanon.  It is famous for its setting on the Saint Sarkis Mountain overlooking coastal towns and villages as far as Akkar to Shikka. A large number of local and foreign tourists visit Ehden annually to enjoy its dry climate, water and forest.  Gastronomy is one of the most prominent tourist attractions in Ehden, especially in summer. Kebbeh Meshwyeh and the Kebbeh Nayeh, both traditional cuisines, and particularly notable in this town.

Jabbour B. Shedrawy came to America in October 1906.  He left Beirut, Lebanon on the La Gascogne, a French liner, and arrived at New York City on October 22, 1906.  Jabbour declared his intentions to become an American citizen at New Orleans in February 1917.  He was naturalized at Biloxi, Mississippi on February 21, 1921 receiving Certificate of Naturalization No. 1511983.(US District Court-Southern Division of Mississippi-Petition for Naturalization No. 251-February 1921) 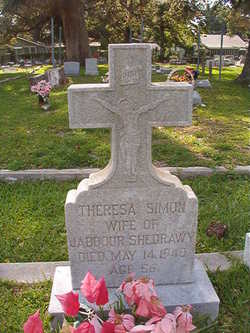