In 1864, the Confederacy attempted to draft him, but Antoine Bellande didn't approve of the idea.  He was residing in Ocean Springs at the time.  The conscript officer was invited to have a drink with him at the Ocean Springs Hotel before they set out to join the Confederate Army.  He managed to get the officer drunk and slipped away.  He offered his services to Admiral Farragut as a ship pilot.  He had become acquainted with the great admiral at Pascagoula where Farragut would visit his sister Mrs. Gurley.

Although serving as a Union pilot in early 1864, Antoine Bellande at the age of thirty-five years officially entered the Union Navy as an acting ensign and pilot on December 16, 1864.  He served primarily on the US Steamer,Cowslip.  The Cowslip was a side-wheel steamer built in 1863 at Newburgh, New York as Meteor.  The steamer was 123 feet long and had a 7' draft.  It was armed with a 20 pound rifled cannon and two 24-pound smoothbore cannon.  Assigned to the West Gulf Blockading Squadron, Cowslip arrived at New Orleans in February 1864.  She carried officers and men as well as delivering mail, stores, guns, and munitions for her squadron.  Cowslip also delivered provisions for refugees.  The vessel was so versatile that it was used as, a tow, convoy steamer, rescue and salvage boat, and also served as a picket and patrol vessel.

It was at the Battle of Mobile Bay in August 1864, that Captain Bellande experienced an exciting chapter in his long life.  He was assigned by Admiral David Farragut to pilot the Union barkentine rigged, screw sloop,Monongahela.  The Monongahela was built at the Philadelphia Navy Yard in 1862.  She had seen action at Port Hudson, Louisiana (March, May 1863), Donaldsonville, Louisiana (July, 1863), and participated in a number of Texas coastal actions before returning to blockade duty off Mobile in the summer of 1864.  Antoine joined the USS Monongahela off Mobile in July 1864. 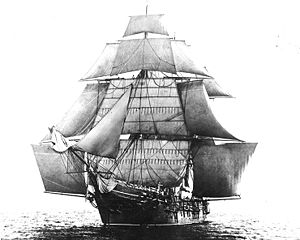 During the fierce battle of August 5, 1864, he watched helplessly as the Monongahela valiantly rammed the well-armored Confederate ram, Tennessee.  A brief description of the Monongahela's activity in the battle is given by Shelby Foote (1916-2005) in The Civil War, A Narrative Red River To Appomattox, page 504.

Farragut's main reliance was on his wooden sloops, particularly the Monongahela and the Lackawanna, which were equipped with iron prows for ramming.  Their orders were to run the ram (Tennessee) down, while the others pitched in to do her whatever damage they could manage with their guns.  Accordingly when the Tennesseecame within range about 9.20, making hard for the flagship (Hartford), Monongahela moved ahead at full speed and struck her amidships, a heavy blow that had no effect at all on the rebel vessel but cost the sloop her iron beak, torn off along her cutwater.

According to Pilot Bellande, the Monongahela got the worst of the encounter with the Tennessee.  The sides of the rebel ram were protected by heavy armor and chains.  When they pulled free after ramming the Tennessee, the deck of his vessel was raked by a withering broadside which removed the head of their water boy from his shoulders.  He also saw the executive officer of the Monongahela fall with both legs shattered.  A shell which dropped into the engine room luckily failed to explode.  Buchanan, the Confederate commander of the Tennessee, must be lauded generously for his bravery and skill in facing seventeen Union ships, three of them possessing armor heavier than that of his vessel, mounting 157 guns, almost all of them larger than those of the Tennessee.

After the battle was won, Antoine piloted the Cowslip on the following morning transporting the victorious Union officers to receive the formal surrender of Fort Morgan.  He concluded his memorable duties at Mobile Bay with the dragging of the harbor to remove any torpedoes or mines.  Captain Bellande's share of the prize money was $800 for his one day work during the battle.  He was discharged from the Union Navy on February 19, 1866.  For his excellent service, he was given a $450 bonus.[The Daily Herald, April 13, 1914, p. 1]

In a recently discovered business ledger of the Pierre Quave Store which operated at Back Bay (North Biloxi) from 1857-1862, Antoine Bellande's name appears in an account held in 1857.  His future father-in-law, Pierre Harvey, had accounts at the same store.