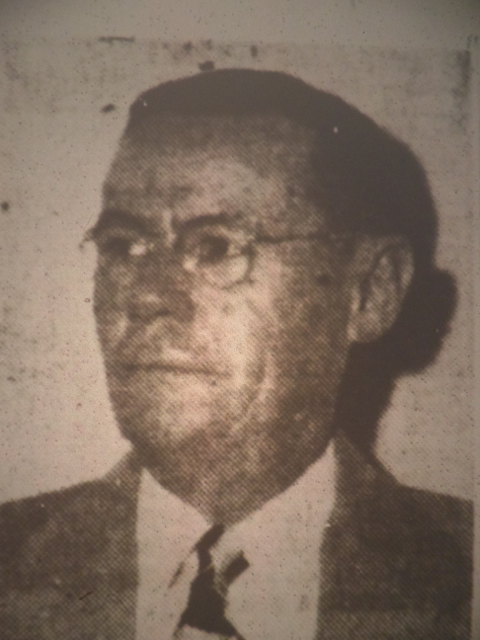 Joseph Bellande was born in France, probably Marseille, in October 1813.  He arrived in this country in 1835, according to his statement on the census of 1900.  He is believed to have come first to New Orleans.  It is not known when or why he arrived in Ocean Springs, Mississippi where he lived out the rest of his life.  He married Rosaline LaFauce, daughter of Jacques LaFauce and Marie Eveline LaFontaine on May 26, 1842.

In 1846, as husband of one of the heirs of the "Widow" LaFontaine property, he received title to approximately 20 acres of land in the heart of present day Ocean Springs.  His tract was about 260 feet wide and 3300 feet in length running from the front beach on the Bay of Biloxi to County Road (now Government Street) in Claim Section 37, Township 7S-Range 8 West.  The present day City Hall, Public Library, Police Station, a portion of Little Children's Park, Bellande Avenue, Dewey Avenue, and the Bellande Cemetery are located on the Bellande Tract.  In 1859, he warranted a deed to Bishop William H. Elder measuring 192 x 100 feet for the site of St. Alphonsus Catholic Church on Porter Avenue for $100.  From 1883 to 1892, he sold much of his land, some to his children, some to local residents Gregoir Weider and George and E.S. Davis, and some to Albert G. Tedo of New Orleans.  As far as can be determined, none of the original holdings belong to any family members now.

Not much is yet known about the personal life of Joseph Bellande.  His family Bible, in French, was recently discovered in the home of one of his descendants, as well as some legal documents and personal papers in the form of a journal.  All of these were handwritten in French.  The legal documents would seem to indicate he was related to a later French immigrant seaman named Bellande - Antoine Bellande, "the Captain", who arrived in this country in 1851.  It appears they were brothers or half brothers, sons of Jean Joseph Marie Antoine Bellande of Marseille, a caulker in the shipbuilding business.

An aspect about Joseph's personal life that makes him a particularly intriguing figure was handed down through the family lore of one of his descendants, but has not yet been substantiated.  Geneva Eliska, the eldest daughter of Joseph's youngest child Zoe, knew her grandfather to be a former priest, excommunicated on the event of his marriage to Rosaline LaFauce.

She recalled that he had gotten into some political difficulties with the Church, and upon the advice of his friends who feared for his life, he fled France.  His writing would indicate that Joseph remained a deeply religious man, his journals consisting of many prayers for the hours of the day, the Stations of the Cross, and the like.  One can only speculate on the inner torment of this man, who despite his excommunication, raised his family in the Catholic Church, was denied admission to the funeral mass on the occasion of the death of his wife Rosalie of asthma in January of 1893.  He sat sobbing out-side St. Alphonsus Church on that Tuesday afternoon.  This was witnessed by his eleven year old granddaughter, Geneva Eliska.  He lived in his house on LaFontaine Avenue for another 13 years, outliving seven of his children.  He provided a home for his daughter Azalie Reus and her two children after she was deserted by her husband.  On June 16, 1907, he was on his deathbed.  Father Peter de Gruyter, the Belgian pastor of St. Alphonsus who was apparently disliked by the entire congregation, came to Joseph, presumably to administer the last rites and hear his confession.  According to Church records, the dying man cursed the priest out of his house.  Joseph is buried in the Bellande Cemetery, his grave marked by a cedar cross, now gone.

The history of Joseph and Rosaline's children can be deduced from census records, wills, and other legal documents, church records, newspaper obituaries, notes found in the Family Bibles, and remembrances of descendants that have thus far been located.

A document from the Jackson County Chancery Court, Cause No. 4636, dated 14 August, 1926, a case involving a land dispute between all the surviving heirs of Joseph, gives a good lead on the fates and whereabouts of his children.  It is not clear why this land on LaFontaine Avenue at Ocean Springs was contested, but the end result was that it was sold at auction to Josephine Friar for $1200.  The profits were divided up proportionately among the heirs, each one receiving an amount somewhere between $25 and $130.  The legal action will be referred to again in relation to each of the children.